Posted on December 15, 2014 by Simon Richardson 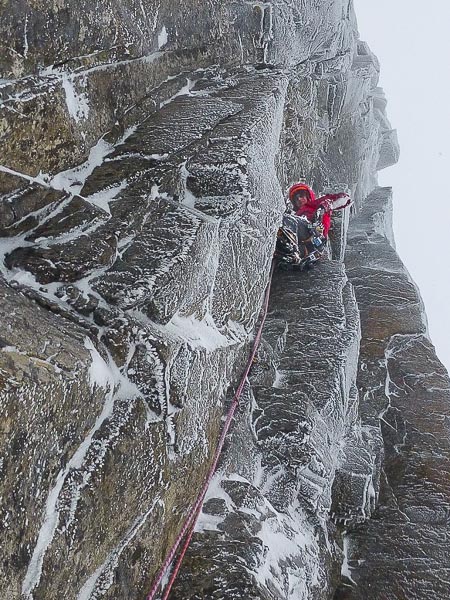 Last week’s ferocious storms relented on Saturday December 13 providing a well-timed weather window before a quick thaw on Sunday. The fast onset of winter made venue choice tricky, as lying snow had insulated unfrozen turf, and there were deep drifts on some of the approaches. The solution was to go where the wind had scoured the hillside, and where the crags faced into the wind so the exposed vegetation was frozen. The Northern Corries fitted the bill as they were windblown, and provided good mixed climbing conditions. Ben Nevis on the other hand was not so good as it had collected large amounts of snow and most climbing was restricted to the lower lying cliffs such as the Douglas Boulder.

An excellent choice was Beinn Eighe where Martin Moran and Robin Thomas took full advantage of the wintry conditions. “After several years of eyeing the line, I finally got on Boggle on the Eastern Ramparts of Beinn Eighe on Saturday,” Martin told me. “It was worth the wait and a special thrill to climb a Robin Smith route in winter.”

Boggle (E1) was first climbed by Robin Smith and Andy Wightman in October 1961 and was unrepeated for over 40 years. “Boggle is one of the mystical routes pioneered in summer by the late Robin Smith in his brief but mercurial career,” Martin explains on his blog. “The route climbs the central portion of the Eastern Ramparts on East Buttress. His description was as enigmatic as it was vague. He said, ‘Climb by cracks, grooves, flakes, corners, hand traverses and mantleshelves away up and right on the crest of the pillar.’ Since 1961 it probably remained unrepeated until Andy Nisbet climbed it 10 years ago, found the features and confirmed a modern grade of E1, 5b. Boggle remained one of the few E1’s on the mountain that had not received a winter ascent.”

Martin and Robin graded their winter ascent of Boggle VIII,8, and described it as “a monolithic and super-sustained winter line with pitch grades of 8, 8 and 7.”

Although the season has barely started, the first winter ascent of Boggle will almost certainly be a contender for one of the stand out ascents of the winter.