Tried and Tested in Glen Coe

Posted on December 30, 2014 by Simon Richardson 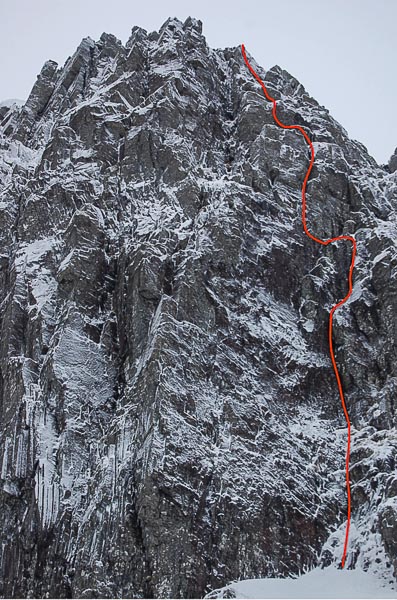 The line of Tried and Tested (VII,7) on Stob Coire nan Lochan in Glen Coe. This sustained three-pitch route was described at being “at the sporty end of its grade.” (Photo Andy Nelson)

Andy Nelson, Kenny Grant and Keith Ball added an excellent mixed route to Central Buttress on Stob Coire nan Lochan on December 29. “We climbed the chimney-corner formed by the spur of Central Buttress and the wall of Satyr at VII,7,” Andy told me.

“Steep turf led to cracks and thence a squeeze chimney. The chimney was brilliant thrutchy fare after the strenuous, technical climbing up the initial corner. The chimney will certainly present an impasse to the larger gentleman (or lady for that matter)! The second pitch worked left to gain the steep hanging groove by a tricky move across a wall. The groove was excellent and airy, with some burly pulling! The third pitch climbed a short steep wall to trend right to join Central Buttress, Ordinary Route. We think it deserves a couple of stars for the excellent and varied climbing.”

Andy can lay claim to being something of a guru on this part of Stob Coire as he made the first winter ascent of Satyr (IX,9) with Donald King in December 2010. Four years on, this still rates as one of the most difficult winter routes in Glen Coe.