Posted on December 31, 2014 by Simon Richardson 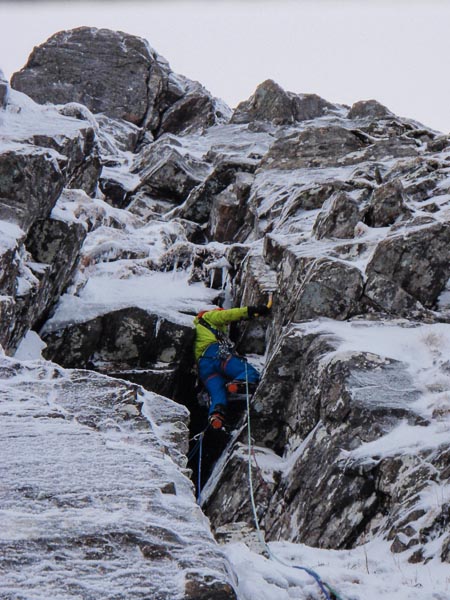 Pete Macpherson on the first ascent of Imperturbable (IV,6) on the South-West Face of Cona Mheall in the North-West Highlands. This the mild-mannered cliff faces the steep and demanding Upper Crag of Beinn Dearg on the west side of Coire Ghranda. (Photo Roger Webb)

Roger Webb, Neil Wilson and Pete Macpherson visited Cona Mheall on December 28. “It’s a good looking crag, but none of us had been there before,” Roger explained. “It was cold and overcast, so despite being south facing we thought it would probably be in condition. Neil broke trail, Pete led the hard bits and I supervised. The crag lived up to expectations, but the weather did not, being more grisly than forecast.

We did a rather good 100m-long IV,6 that we called Imperturbable after Neil’s total lack of reaction to being avalanched on the way in. Pete and I were very perturbed watching him go but Neil simply continued the ongoing conversation some 50m or so lower down the hill. This crag is a very good place to go to see the wilds of Coire Ghranda without the grim foreboding (route name for you Guy) of the Beinn Dearg side. The existing routes (all three of them) look excellent. In particular Twisted Rib III,4 (Robertson brothers and Jason Currie 1998) should be on the list of anyone who is looking for a great but not too desperate day in a spectacular and lonely spot.”

4 Responses to Unperturbed on Cona Mheall