Posted on January 4, 2015 by Simon Richardson 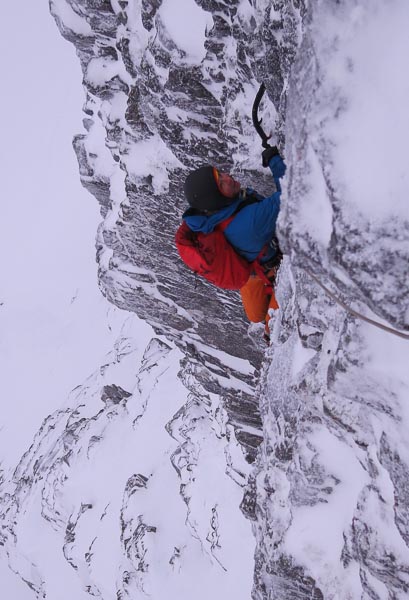 Choosing where to climb this weekend was a tough call after the devastating New Year thaw. With temperatures only dropping on Friday, it was difficult to figure out how much it had snowed, and where, and whether the turf had re-frozen. In the end, Roger Webb and I opted for the failsafe option and visited Ben Nevis on Saturday January 3. We were hoping that the thaw had left sufficient snow on ledges and flat holds to bring in an icy mixed possibility in the Tinkerbell area of Creag Coire na Ciste.

We were second into the corrie following behind the welcome footsteps of James Richardson, Andy Munro and Helen Rennard who were heading for The Comb. As the daylight broke it was clear that high up, the mountain was icy and frozen hard, and tell-tale streaks and blobs of white on our objective looked encouraging. An pleasant icy gully leading through the lower tier warmed us up for the first pitch that climbed a mixed wall before joining the upper section of the intial icy groove of Tinkerbell.

Our line then went left onto the impressive wall to the right of Central Rib. This wall overhangs for much of its height but is cut by a tapering ramp that leads into its centre. Unfortunately the ramp disappears and the way is blocked by an undercut monolithic block. The plan was climb the ramp, hand traverse the block and then climb the vertical groove above that leads into a parallel ice line left of Tinkerbell.

The ramp was reassuringly icy, but it was clear that hand traversing the monolithic block was going to be a non-starter (for me at least). After a lot of hesitation I hooked a high flat hold on the wall above, stepped up on a small rounded nick and precariously stood on top of the block. The wall above was overhanging and pushing me out and the only way to get back into balance was to kneel on the block. I urgently needed a placement to lower myself down but there was nothing. I contemplated falling and catching the block as I went past, but eventually I found the tiniest of hooks and lowered myself down, first one knee and then two.

I could now see round the block and into the groove but the view was not good. A steep overhanging wall barred entry to the groove and there was no protection in sight. Eventually I dropped down to the left, changed feet on the tiniest of footholds, hooked a poor edge and bridged up sloping icy dimples to gain the foot of the groove. I was now a long way above my last gear, and my tools were starting to rip. There was nothing for it but make, one, two, three, four, five moves on the most tenuous of placements. One slip and I would have been off. Eventually my right tool sank into a centimetre-deep crack and vibrated. My heart sang. One final pull took me out of the groove onto easier ground.

By the time Roger came up it was dark, but he made short work of the final icy groove and led all the way to the top. The plateau was bathed in beautiful moonlight. It felt late but was only about 6pm, and made all the more sociable by bumping into James, Andy and Helen after their fine ascent of Tower Face of the Comb.

2 Responses to Tenterhooks on Ben Nevis