Age is Only a Number

Posted on January 8, 2015 by Simon Richardson 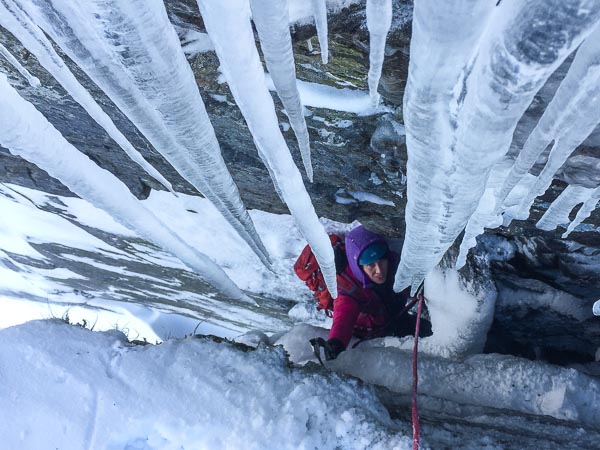 Jenny Hill climbing the spectacular chimney on the first ascent of Age is Only a Number (III,4) in Corrie Farchal. There are now over a dozen routes in this easily accessible corrie in Glen Clova. (Photo Alex Thomson)

When I enquired about Bonhard Buttress in Glen Clova last month, Alex (Tam) Thomson replied to me with details about the first ascent. I was delighted to hear from Tam, as he is something of a Glen Clova pioneer and made the first ascent of Farchal Gully in February 1980 with Ian Shepherd. For nearly 30 years this was the only (recorded) route in Corrie Farchal, but the crux runs over blank slabs and is rarely iced. I’d been watching the route myself for the past ten seasons or so and finally climbed it in March 2013. Corrie Farchal has been unusually snowy this year, and Farchal Gully received another ascent in December. I doubt it has seen many other visits despite being such a prominent line.

Tam visited Corrie Farchal on January 4 with Jenny Hill made the first ascent the steep buttress high on the right side of the cliff. Age is Only a Number (III,4) takes a ramp and chimney and finishes with a exposed traverse and a steep corner. Tam first spotted the line March 2012. “I’d just climbed Central Gully in Winter Corrie and thought I would pop over and have a look at Farchal Gully and the possibilities for new lines,” Tam told me. “Farchal was a bit thin for soloing so I followed the ramp line up right, and that’s when I spotted the corner and chimney. I skirted further right and followed the snow line up, then back left onto the flat area to look down on the line. I could see the chimney exit and the line coming up to where I stood. The wall above with its leftward lines, looked like the best way to finish the route. So a mental note was made to come back and do it. Hearing that there was activity in the corrie was nagging at me to get back and do the route, but it still took nearly three years to get there!”

Elsewhere in the corrie, Sophie Grace Chappell, Ben Richardson and myself added Over the Hill (IV,4) on December 28. This route takes the natural line of weakness between Brains Before Brawn and Elder Crack Buttress, and is notable for an undercut slot that was considerably eased with a good coating of ice and a convenient snow cone at its base. Rarely is nature so accommodating!

Finally, on January 3, Martin Holland Ian McIntosh added another Direct Start to Silver Threads Among The Gold. “It’s short and the difficulties are in the first few moves, but it’s much more in keeping with the climbing above,” Martin explained. “We had the usual grade debate and settled on IV,6.” Wilf and Mac then continued up Pearls Before Swine before finishing up the headwall of Silver Threads Among the Gold, which they had missed the previous time when they made the fourth ascent.

8 Responses to Age is Only a Number