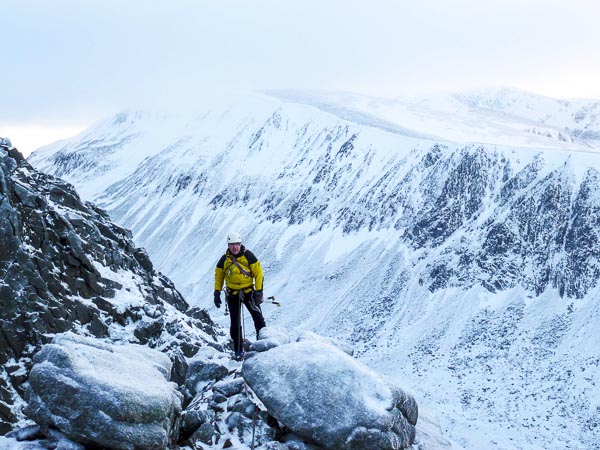 Jonathan Preston moving along the horizontal section at the top of El Dorado (III,5) on Lurcher’s Crag on Cairn Gorm during the first ascent. The great defile of the Lairig Ghru and the cliffs of Sron na Lairige can be seen behind. (Photo Andy Nisbet)

“Shangri-La might be overstating it a bit, but an overlooked section of crag on a very accessible cliff is my idea of a revelation’” Andy Nisbet writes. “One wild and warm day in December (there were a few of those!), I was after some exercise and looked at a picture of Lurcher’s Crag. All the good lines had been done but I was only after some exercise, so what about the upper crag left of Central Gully? No routes, so why not go there?

Arriving at the Cairn Gorm car park mid-morning, the weather was as unpleasant as I had thought. But there was only me, so I could just go as far as I wanted. The advantage of being late is that there was a trail through deep wet snow to ‘Lurcher’s Ridge’, and then it wasn’t far to the crag. The wind was a howling westerly but there was the usual shelter in the vortex on the summit. And there wasn’t any snow on the crag, or even in Central Gully. But once you’ve left the car, turning back is a waste of effort, so I put crampons on and descended into the maelstrom. The aim was to get back up as quickly as possible so I took the first ledge on to the crag and zigzagged my way up to reach the top with some relief. Back out of the gale, I actually thought the climbing was OK and it would make a reasonable winter route.

Forwarding a month or so to January 3, the weather had just turned cold but had still to settle down (will it ever?) so I suggested the crag to Jonathan Preston as a handy place to go, and he agreed with surprising enthusiasm. Even as we descended into Central Gully with the usual upward gale, then traversed out to the start of the route, he still continued enthusiastically out to a crest beyond and told me there was loads of turfy crag below. This did rather puzzle me, but I was focussed on the line above, so I called him back and set off. Now with a rope, I took an overlap direct and on the second pitch, Jonathan climbed a direct groove to very much improve the line (it was Grade III,4).

That was quick, so why not investigate the turfy ground below, and try to link up with the crest on the left. This time we had to descend further and bypass the crux pitch of Central Gully (which you can do on the left, looking down). Coming back under the pitch, it was surprisingly icy, certainly thick enough to climb and nicely soft with water trickling down, but I doubt wet ice screws would have held. Fortunately we didn’t have to decide, but needed to investigate a lot of rock beneath our first route. Our first excited impression of ice smeared crack-lines soon mellowed when reality kicked in and actually they were steep, smooth and blind.

We moved on to an icy corner which looked more reasonable, and then a deep V-groove which was hidden until underneath and looked quite easy. It turned out to be much better and steeper than it looked. The back was well iced but squeezed in there with your axes in the ice, it turned out to be very hard to step up or even see your feet (not helped by snow blowing up your nostrils and me being long-sighted anyway). Pulling harder than permitted by good style seemed to work and led to easy ground with another slabby tier above, this time with blobs of turf and definitely no hard pulling. Jonathan soon reached his footsteps from the earlier recce and continued up the crest for a long pitch. The finish was easier but we decided on IV,4 overall. We called it Shangri-La, and the first route Beyul.

We couldn’t leave when there was another line, this time right of our first route and overlooking the top of Central Gully. The first pitch was fairly easy but the second had two short overhanging sections, both on amazing hooks round chokestones, finishing on a horizontal crest (III,5). We called it the last on the theme, El Dorado.

The nice thing about local climbing is that you get down in daylight, and without a rush.”