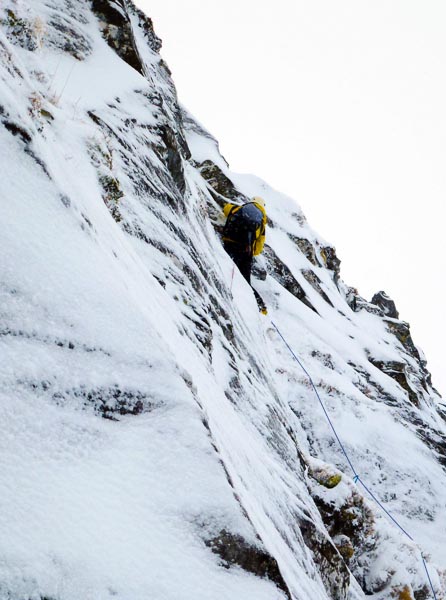 Jonathan Preston on the first ascent of Twerk (V,5) in Coire nan Eun deep in the Fannaichs. This little known cliff on the north side of An Coileachan has probably been visited only half a dozen times. (Photo Andy Nisbet)

The continuous run of stormy weather this winter has made choosing a venue and selecting an appropriate route particularly challenging. As ever, Andy Nisbet has consistently demonstrated the knack of being in the right place at the right time. Take this recent example from the Fannaichs:

“The winter of 1994 was one of the great ice years that regularly happen every seven or eight years (1979, 1986, 1994, 2002, 2010, 2017),” Andy writes. “I climbed a lot in Coire Ghranda (Beinn Dearg) that year and returning to the car, I kept seeing white streaks on a distant cliff in the Fannaichs. On the last weekend before the weather turned mild, I decided to visit and approached along the route I had been watching, a long way from the Ullapool road. One reason for going that way is that I wasn’t really sure where the cliff was, so it seemed to make sense keeping it in view on the approach. For once the white streaks did turn out to be ice, and I had a great day (in retrospect) scaring myself on routes I shouldn’t really have soloed, the justification being that the ice was a once in a lifetime chance.

I didn’t really expect anyone else to go there, but several parties did, culminating in what must have been a great day when Erik Brunskill and Dafydd Morris climbed the hard and serious Slam (VI,6) and followed it with Feral Buttress, one of the steepest Grade IIIs in Scotland. There is my speculation that they did it after Slam and were on such a high that they didn’t notice the hard bits. They also cycled in from Grudie, which did seem much more sensible.

Twenty years after my first visit, the feeling that any day there would be an anti-climax had worn off, so I walked under the cliff on a Fannaichs Munro bagging trip. It’s not very big, but turfy, north facing and with a couple of possible lines all fitted the bill for a visit. Sandy Allan and I sat in the layby on a warmish day in February 2014, hummed and hawed for a while, then decided to go home. Much later in the year (December 28), Jonathan Preston and I were thinking of somewhere to go, and it seemed to fit the bill.

The cycling road turned out to be quite icy and the weather turned out to be mistier than the forecast had said. It’s not the easiest cliff to approach, with a narrow terrace across a very steep hillside only being shown on the 1:25000 map and not on the 1:50000, and it was very white up there. I cursed not setting my altimeter when we ended up wading around in deep snow on a small ledge, which ended in nothing. Some backtracking and a second attempt higher up luckily turned out to be correct.

The cliff was rather plastered in snow but we still decided to try the harder line on the far right. We soon found out that the snow had rather insulated the turf, and as I struggled up the first pitch, I began to remember that Erik had tried a line somewhere near and backed off due to lack of gear. I presume we were trying an easier line because I did reach a big ledge below some very steep and smooth ground. Jonathan was tempted to give it a go, but I persuaded him to climb a turfy ramp off to the right. It clearly wasn’t easy as he disappeared out of sight, but then reappeared directly above my head waving with enthusiasm; obviously he’d cracked it. The last pitch turned out to be much easier than it looked from below, helped by the turf being exposed and well frozen. We called it Twerk (V,5), nothing to do with Jonathan’s climbing style.

A week later (January 4) it was warmer but the turf had been frozen on Lurcher’s Crag the day before. The temptation of a clear road was enough for a return to the easier line. This time Jonathan took his GPS to find the approach terrace and we reached the crag quickly. This line was on the left of the East Buttress and the ice on the first pitch was much thicker than on the first visit. It was still a bit smeary and ended in bottomless soggy sphagnum moss. Jonathan’s pitch was more technical and took a slightly twisting line up steep turfy ground. The weather was warming all the time so the descent was very boggy, but we even got home in daylight. The route was named Twist (III,4).”

Simon Richardson is a passionate Scottish winter climber
View all posts by Simon Richardson →
This entry was posted in New Routes and tagged An Coileachan, Andy Nisbet, Jonathan Preston. Bookmark the permalink.