The Sea, The Sea – Second Ascent 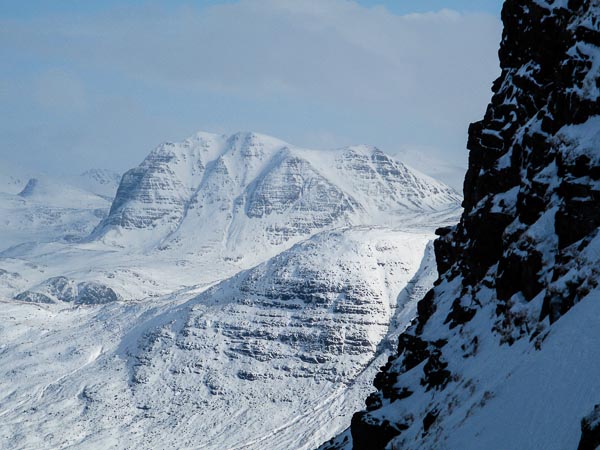 Looking north-east to Slioch with the impressive Atlantic Wall forming the left skyline. The wall itself is 250m high and the adjoining ridge a further 200m. Over 450m elevation gain is required to reach the summit (the most feasible descent) making the winter routes on Slioch amongst the longest in the British Isles. (Photo Simon Richardson)

When Cold Climbs was published in 1983, the first two chapters on Beinn Bhan and the Fainnaichs were a revelation. These areas were terra incognita for most Scottish climbers at the time, and they launched a multitude of dreams as keen winter climbers began to expand their horizons from Ben Nevis, Glen Coe and the Cairngorms.

Thirty years on and the publication of The Great Mountain Crags of Scotland is having a similar effect. Roger Webb’s inspiring chapter on Slioch’s Atlantic Wall has intrigued many, and it was clearly not going to be long before the cliff saw some attention this winter. Before this season, Skyline Highway was the only winter route on the wall to have seen a repeat.

On Saturday January 17, Erick Baillot and Rob Bryniarski repeated The Sea, The Sea (VII,7) the plum line up the centre of the face. This Roger Webb-Neil Wilson creation stems back to March 1996.

“These were the best conditions I’ve ever seen on a sandstone crag,” Erick told me. “The turf was frozen solid, there was ice forming in lots of places and there was a solid blanket of snow from 400m. We linked a lot of pitches. I led pitches 2, 3 and 4, and linked pitch 6 and the 40m groove above to give a full 60m. Rob led on and we climbed 80m of easier mixed ground moving together and we still finished [the lower wall] in the dark. By then a strong south-westerly wind had picked up and we were battered by graupel. We went up to the summit via the incredibly long upper ridge and descended by the bealach between the two summits. The crag is amazing and I will go back to it despite being such a big day (we were 15 hours car to car).”

I think Erick and Rob’s ascent was impressively quick. When I last climbed on Atlantic Wall Roger and I arrived back at the car after a 16-hour trip and Roger commented that this was the first time he’d ever climbed on Slioch and returned the same day he set off!

Simon Richardson is a passionate Scottish winter climber
View all posts by Simon Richardson →
This entry was posted in Repeats and tagged Erick Baillot, Rob Bryniarski, Slioch. Bookmark the permalink.

7 Responses to The Sea, The Sea – Second Ascent