Posted on November 28, 2017 by Simon Richardson 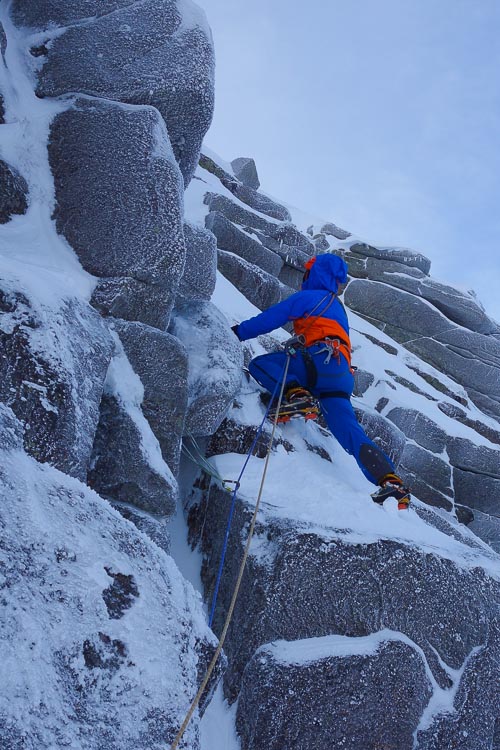 The popular early season cliff of Creagan Cha-no on the east side of Cairn Gorm has been busy over the last couple of weeks. In the main, it has been the popular classics such as Anvil Gully, Jenga Buttress and Chimney Rib that have seen most of the traffic. The cliff is still yielding new routes however, and the most challenging of the recent additions is a left-hand start to Mainmast by Luke Davies and Georgia Drew climbed on November 25. Cutty Ranks (IV,6) follows the corner-crack just left of the main offwidth before finishing up the original route.

On November 24 and 26, Roger Webb and I visited the Duke’s Wall area that extends from the deep V-groove of Wile-E-Coyote to Duke’s Rib. The two groove-lines to the right of Wile-E-Coyote gave Fast and Furry-ous (IV,6) and Road Runner (IV,5). They provided typical Cha-no climbing – short steep well-protected crux sections with good belays at mid-height and easier climbing above. We also climbed the prominent right-trending gully-groove on Blood Buttress at Grade III finishing up True Blood.

There are now over 50 routes on the cliff, but information on the less well-known climbs is buried deep within SMC Journals. To remedy this, the SMC are planning to publish an app later this winter that will have full set of topos making it possible to locate all the routes. Watch this space!