Lurching About In The Powder

Posted on November 29, 2017 by Simon Richardson 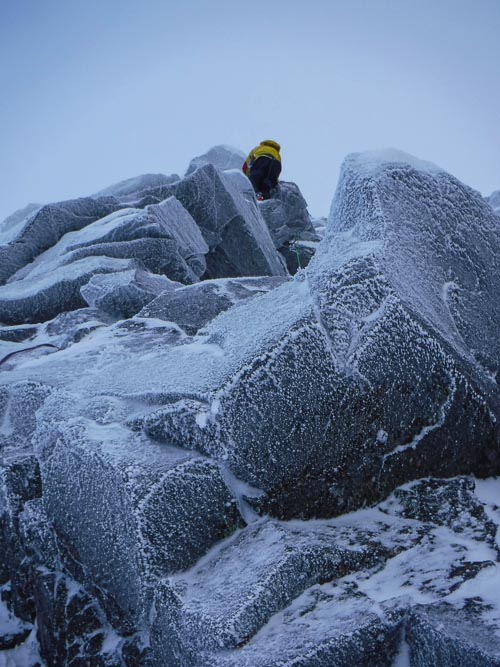 Andy Nisbet on the steep section of Drystane Ridge on Lurchers Crag on the west side of Cairn Gorm. Climbing solo, Nisbet made the first ascent of this worthwhile route ten years ago and rated it Grade II, but last weekend’s re-ascent suggests a III,4 grading may be more realistic. (Photo Sandy Allan)

“It’s early season on Cairn Gorm,” Andy Nisbet writes. “I had done a couple of versions of the Fiacaill Ridge from Sneachda earlier in the month, and now routes were frozen. Not much snow, but enough to keep us happy, even if the purists would complain. The ridges at Lurchers might be too bare, but the grooves should be snowy, and one of them hadn’t been climbed. There’s always the risk that grooves at Lurchers could be smooth and slabby, but this wide one looked from the photos that it should give us the chance to zigzag past any difficulties.

Jonathan Preston was the trail breaker [November 19], leading his limping companions. I’ve been limping for a while but this was Steve’s first day on the hill since breaking his talus bone. So it wasn’t the fastest approach, especially down a soggy South Gully with a significant ice pitch low down. We reached the start of Drystane Ridge well spread apart, but at least we were able to pick out a potential zigzag line. I have all the crag shots, so I’d found the line and was given the lead.

Starting near Drystane Ridge, the key was to find a way across the groove above a steep smooth start and below a barrier wall to a weakness at the far side. The traverse was a bit spooky, on a low-angled hanging slab of very smooth rock and only a dusting of powder on verglas. It would have been a walk with any consolidated snow, but I went across on my knees for predictable friction. I could have belayed at the far end, but I couldn’t resist a short wall leading to easy ground. I should have predicted how bad the rope drag would be, but it only really kicked in once I was committed. Five minutes of pulling with both hands, followed by quick movements before the rope slipped back, allowed me to reach a spike. And as predicted, Jonathan whizzed up an easy last pitch.

Pegleg seemed a fitting name for the two hobblers in the party, and a grade of III,4, although it could well be less with a good build-up. Not that Lurchers gets a good build-up very often these days; snowy easterlies don’t happen that often any more.

Since we’d started close to Drystane Ridge, and both Jonathan and I had recently climbed it by a turfy corner on its right side, we started wondering about the crest. I was fairly sure I’d made the original ascent [climbing alone] on the crest, but I couldn’t really remember and it did look hard for on-sight soloing. There was a subsequent summer ascent that was given Moderate, and again it must have climbed the crest. The only answer was to climb the route again and see.

The weather was windy for a few days until Sunday November 26. Steve had decided to give his ankle another couple of weeks healing and Jonathan had rescue team training, but Sandy Allan was keen (and another good trail breaker in a lot more snow). Fortunately the snow on Lurchers’ Ridge had mostly blown away, so we reached a much snowier Drystane Ridge without the expected slog. The crest still looked very steep, but there had to be a way. Initially it was very helpful until I came across a barrier wall. It was hard to pick a line since the capping slab was deeply buried. It only needed one good crack but I couldn’t find one. After three attempts in different places, I was back at the same place. Reluctant to give up on something I’d soloed before, I tried once again on the right, and my axe slotted into the crucial crack. A couple of pulls with a bit more determination, and it was cracked. Easier flaky ground led to a belay, and the hope that Sandy hadn’t frozen solid.

But he ran up it, mostly to get warm again, and then ran up the easier upper ridge, so suddenly we had gone from wondering if we could do it, to being at the top. We discussed the grade, and it certainly wasn’t the Grade II in the guidebook, but Sandy had found a slightly easier way of doing the crux, so we settled on III,4. Whether I was having a good day in 2007, or just a confident one, who knows, but it shows you can’t trust soloing grades. It’s a good quality route anyway, worth a star anyway.”