The Exorcist Climbed in Winter At Last!

Posted on November 27, 2017 by Simon Richardson 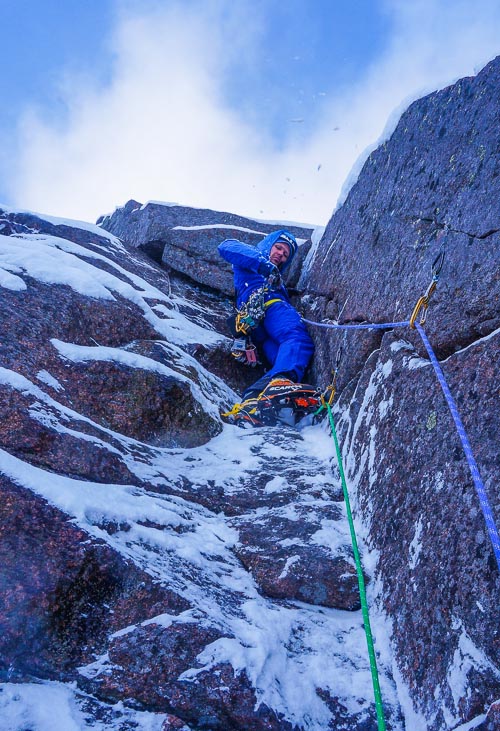 Guy Robertson on the upper section The Exorcist (VIII,8) on Hell’s Lum Crag in the Cairngorms. A winter ascent was first reported in 1999 but a different line to the summer route was followed. (Photo Greg Boswell)

On Friday November 24, Guy Robertson and Greg Boswell pulled off the most impressive performance of the winter so far when they made the first winter ascent of The Exorcist on Hell’s Lum Crag at the head of the Loch Avon Basin. This excellent three-pitch summer HVS was first climbed by Adrian Liddell and Bob Smith in June 1975 and lies on Grey Buttress at the left end of the cliff.

Nineteen years ago, in October 1998, Alan Mullin and Steve Paget made a winter climb in the vicinity that was widely reported as The Exorcist. Their ascent prompted controversy at the time because it was climbed just after the first snowfalls of the winter (early season climbing was not as popular as it is today), but it turned out that they did not climb the line of The Exorcist after all. Their ascent followed the Right-Hand Variation to Evil Spirits before finishing up Hell’s Lump. The climb was graded VII,8 and was an exciting ascent because the rope jammed and Mullin had to free it by cutting with his axe. It was one of the first routes in Scotland climbed with monopoint crampons and the pair used twin adzes to cope with the wide cracks.

Friday was a poor day for high standard winter climbing, with strong blustery winds and persistent spindrift. Nevertheless, Guy and Greg made a smooth ascent of the complete summer line grading it VIII,8.

“It was a good way to start off the season,” Greg told me. “Some techy thin slab climbing led into a burly and thought-provoking crux going through the overlap to gain the hanging corner. Got the juices flowing, and the yearning for more has begun! But maybe less scary granite slabs – my 45 degree training board doesn’t make you brave, just strong!”

4 Responses to The Exorcist Climbed in Winter At Last!