Posted on November 13, 2017 by Simon Richardson 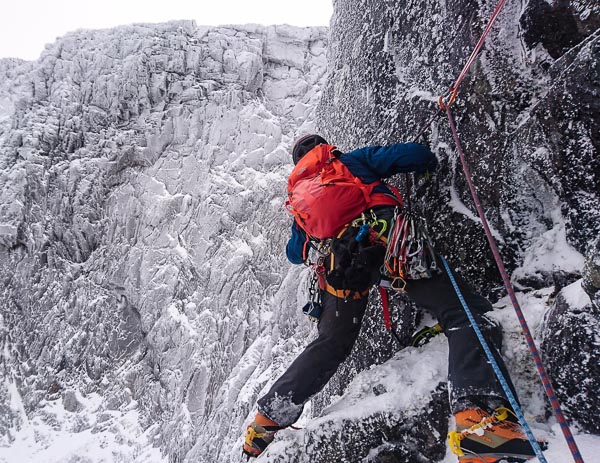 Ken Applegate on the second pitch of Optimists Arête (V,6) on Ben Nevis during the first ascent. This four-pitch mixed climb situated high on the mountain just left of Upper Tower Cascade Right at the head of Tower Gully. The smooth hoar-covered slabs of of Indicator Wall can be seen in the background. (Photo Steve Holmes)

Taking advantage of the good early season snowfall in the West last weekend, Steve Holmes and Ken Applegate made the long approach up Tower Gully on November 11 to the unformed Upper Tower Cascades on the East Flank of Tower Ridge. This is about as high as you can go on the Ben and the pair were rewarded with Optimists Arête (V,6) – a new four-pitch mixed route that climbs the blunt edge running up the side of the steep wall left of Upper Cascade Right. Two steep pitches led to easier-angled ground followed by stepped chimneys to finish on the plateau 10m left of the top of Tower Ridge.

“We actually went to climb last year’s addition Grand Central,” Steve explained. “But we were drawn into potentially unrecorded/unclimbed terrain – as you do! It was a surprisingly good route, each section had good climbing with some nice Tech 6 on the first two pitches. Much steeper than it looked of course, and sticking to the arête created some pretty exposed positions – nice climbing whilst everything else was a little lean.”

It was a busy weekend high on the Ben with ascents of Sioux Wall (VIII,8), Babylon (VII,7) and Hobgoblin (VI,7) on Number Three Gully Buttress – the mountain’s early season crag of choice for steep mixed climbs.