Posted on November 12, 2017 by Simon Richardson 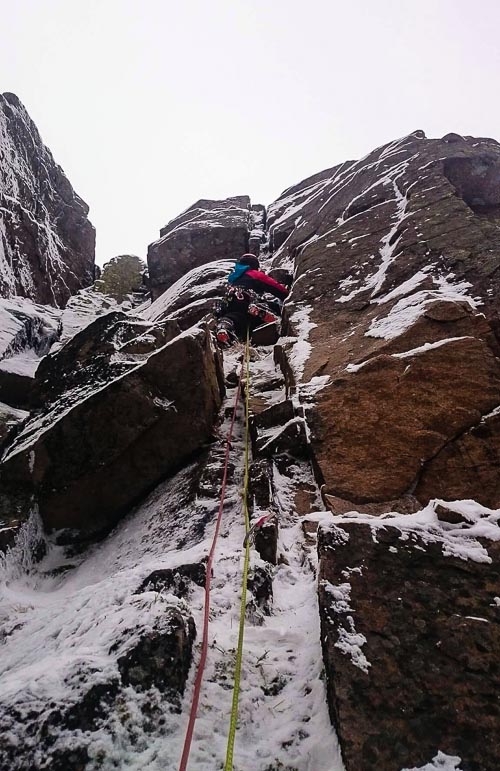 Drew Stevenson on the first ascent of Early Bird Groove (IV,6) on Lochnagar. This single pitch route takes the steep crack to the right of the prominent groove of Early Bird on the upper right wall of Black Spout, Left Branch. (Photo Stuart Cossar)

Full winter conditions arrived this weekend on the Scottish mountains with climbing activity on Ben Nevis, the Cairngorms and North-West. First to report a new route were Drew Stevenson and Stuart Cossar who made an enterprising first ascent of Early Bird Groove (IV,6) on Lochnagar on November 11.

“Myself and Stuart Cossar visited Lochnagar on Saturday and went high in the corrie to find something that would be good to climb,” Drew told me. “We noticed that as we climbed further up Black Spout, Left Branch and past Pinnacle Gully 2 the turf became well frozen. We spotted a groove with bulging choke stones up from Crumbling Cranny and immediately right of Early Bird. It had well frozen turf and welcome hooks and torques and we reckon it went at a grade of IV 6. The route is only 35 metres long, so we felt that it didn’t warrant Grade V, but was quite technical. It reminded us of climbing a short route in Creagan Coire Cha-no.”