Give and Take on Ben Nevis 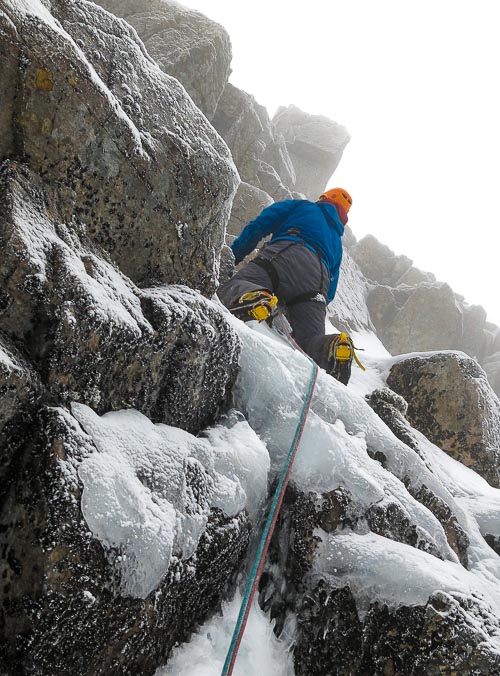 We are going through a very unhelpful weather cycle at the moment where snowfalls are followed by rapid thaws and the resulting dry conditions are locked by high pressure systems for days. We desperately need significant snowfall and a rapid sequence of freeze-thaw storm cycles to bring routes into condition. In normal circumstances, snow banks ooze ice in stable weather systems, but the hills are so dry there is precious little snow to act as a source.

I met up with Robin Clothier on January 22 for a route on Ben Nevis. I’d been away ice climbing in Austria for much of the previous week and had read reports about how little snow there was on the Ben after last week’s thaw, but even these couldn’t prepare me for the shock of Observatory Gully. Normally this is full of snow many metres deep, but it was now rubble with just the tiniest sliver of snow running up the centre. Higher up it opened out into two continuous streaks but it was only once we were below Gardyloo Buttress that things began to feel wintry.

I had remembered that there was an unclimbed line of cracks in the vicinity of Tower Gully, and sure enough Robin spotted them on the right wall disappearing into the gloom up the pillar between the (unformed) lines of Upper Tower Cascade Left and Central. Temperatures had been freezing for a couple of days, and it had snowed a little the night before, so mixed climbing conditions were reasonable and the rock was white. The route followed a succession of ramps, grooves and cracks using frozen turf, old snow and new ice. Four pitches later we topped out onto the plateau feeling a little surprised that we had found something worthwhile to climb.

We were not the only optimists that day. Helen Rennard (who has probably climbed more difficult routes this season than anybody else) and Ben Silvestre cruised up Sioux Wall which had also accumulated a white coat overnight. The cracks were free of verglas making for an enjoyable ascent. Keen as mustard, Helen and Ben were in place early next morning to do another mixed route in the Number Three Gully area. The temperature was cool and there was a slight breeze, but the weather had been up to its usual tricks once again – steep mixed climbing was no longer viable as all traces of the previous day’s snowfall had vanished in the wind.