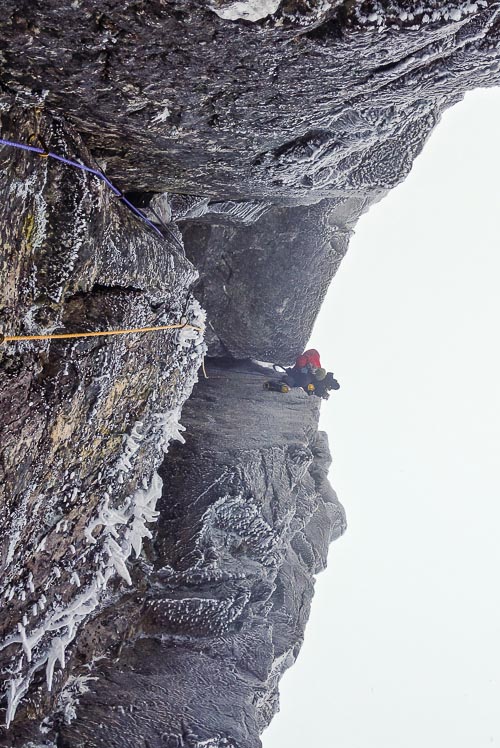 Murdoch Jamieson on the crux section of Crazy Eyes (VIII,9) on Beinn Eighe during the second ascent. This spectacular route takes the roofed corner right of Sundance on the Far East Wall. (Photo Andy Inglis)

A significant ascent on January 14 (one of the finest winter climbing days of the season so far) was the first repeat of Crazy Eyes (VIII,9) on the Far East Wall of Beinn Eighe by Murdoch Jamieson and Andy Inglis.

“Crazy Eyes is a line that I’ve wanted to get on ever since the BMC Winter Meet in 2014,” Andy told me. “I remember a stunning morning three years ago when myself and partner Piotr Sulowski craned our necks back to take in this wild (and what would, in years gone by, been called ‘futuristic’) line with Will Sim and Olov Isaksson. We didn’t think it had been done so it was an easy decision for Will and Olov to jump on it! As it turned out they had a great time and gave the route three stars! Will raving about it afterwards should have given me a clue as to how hard it might be…!

For Murdo and I it was a miracle we even got on the route last Saturday, after Murdo ended up hip-deep in a bog on the walk-in, with the only saving grace being a meandering track (I wonder if they were drunk?!) through the deep snow left by keener climbers than us earlier that morning! The route itself was excellent with lots of variety, turf, ice, a squeeze chimney, steep cracks and a technical roof! Murdo even made it look like he had to try at one point, and I must have imagined it when I thought he shouted down he was pumped!

A very memorable and at times goey route, and a splendid sandbag at the originally suggested grade of VII,9. Chapeau Olov and Will!”