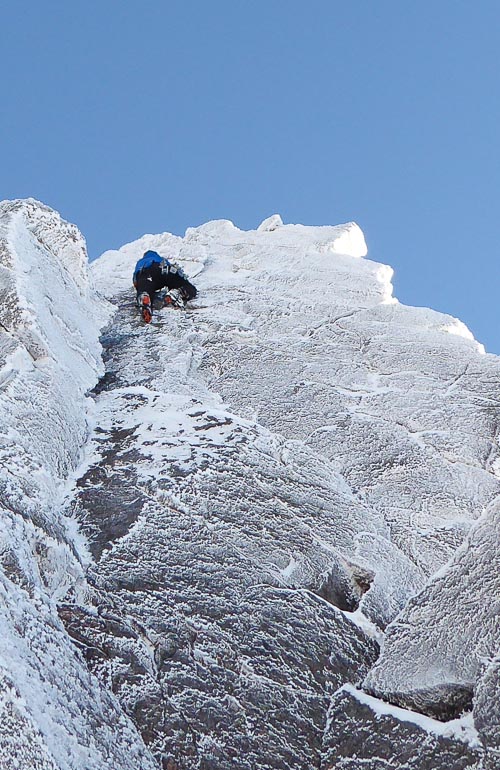 Simon Richardson climbing a new V,7 on the front face of The Forgotten Pinnacle on Braeriach. The price for the excellent rimed-up crack climbing was a difficult two-pitch approach up powder-covered slabs that in a normal year would be covered in climbable snow-ice. (Photo Roger Webb)

Saturday’s (January 28) snowfall brought many of the higher cliffs into winter condition at the weekend. Ben Nevis was busy with many of the Early Season favorites such as Gargoyle Wall, The Clanger, Cutlass and Sidewinder seeing ascents. Notable ascents include an ascent of Sioux Wall by Malcolm Bass, Neil Silver and Paul Figg and a rare ascent of Gremlins under mixed conditions by Neil and Helen Rennard. Normally this excellent route to the right of Thompson’s Route is climbed on thin ice.

It’s not early season of course, but after the very dry winter it seems that way. Unfortunately lack of ice and ‘permafrost’ to glue the cliffs together means that many of the Ben’s mixed routes are extremely loose at the moment, and a strong team had to retreat from Sake on Number Three Gully Buttress after a belay ledge collapsed.

Mixed routes in the Cairngorms appear to be a little more solid although there are still many loose blocks. Susan Jensen and Andy Munro climbed Python on Carn Etchachan and Steve Elliot and Ross Cowie enjoyed the magnificent Postern on the Shelter Stone. Deeper in the Cairngorms an ascent of Mitre Ridge was reported, and Roger Webb and I completed an obscure, but long sought after project, when we climbed the front face of The Forgotten Pinnacle in Coire nan Clach on Braeriach.

2 Responses to Snow At Last!