Failure Is Not An Option 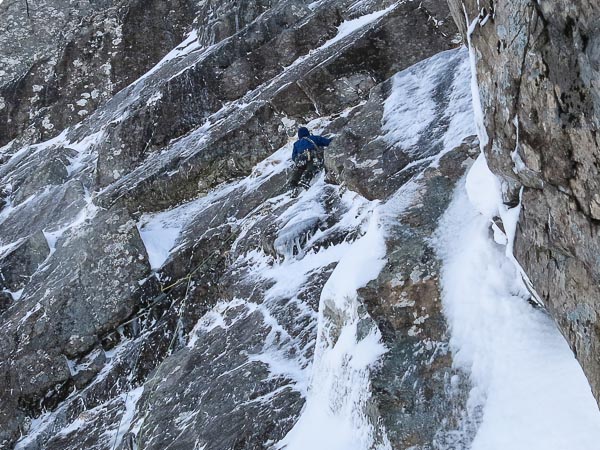 Iain Small working his magic on thinly iced slabs during the first ascent of Failure Is Not An Option (VIII,9) on Ben Nevis. The bold climbing low down on the five-pitch route was an exciting prelude to highly technical and strenuous climbing above. (Photo Simon Richardson)

A curious result of this year’s difficult conditions was the temporary formation of ice at low levels on Ben Nevis during the third week in March. The icefalls below Carn Dearg became remarkably icy. These don’t normally merit much notice, but they particularly intrigued Iain Small and myself on March 22 as we were looking to settle unfinished business on the North Wall of Carn Dearg situated just above.

Between the lines of Staircase Climb and Macphee’s Route there is an area of unclimbed blank overlapping slabs that lead up to the crest of the buttress, and ultimately the twin grooves cutting through the impressive triangular headwall to the right of the upper section of Waterfall Gully. These grooves are all too obvious – you can see them from the CIC Hut – but to make any sense of climbing them you have to climb the ground below. In March 2014, after a false start up the overlapping slabs, we found an alternative way to reach the easier left-hand groove. It was an exciting day with success in the balance until the very end, so we called our route From The Jaws of Defeat (VIII,8).

To climb the right-hand groove in the headwall we needed start up the lower overlapping slabs. We required ice and fortunately there was just enough. I use the term ‘just enough’ guardedly, as there was just enough for Iain’s superbly precise dedicate touch. It was only a centimetre thick and the kind of ice where if you hit it more than once it all falls away. Needless to say there was hardly any protection, but Iain dances up ground like this. A second difficult pitch took us to a long ropelength of easier ground that led to the foot of the triangular headwall.

We joined From The Jaws Of Defeat for a few metres that before breaking right to the base unclimbed right-hand groove. It was a stupendous sight. The groove was smooth-walled, very steep and divided into three sections. It looked close to impossible. We had already done a lot of climbing to get to this point and the shadows were beginning to lengthen. Once again success was in the balance.

The first section of the groove was technical and thin, the second bold and the third overhanging. Fortunately the overhanging section had two chockstones, which turned it from probably impossible to brutally strenuous. The pitch was Tech 9 from bottom to top, and by the time I’d followed it the light had gone and it was completely black. Fortunately we’d been in exactly this same position before, so we set off up two long pitches up easy ground to join Ledge Route, where we were delighted to find fresh tracks in the waist deep snow.

We slunk into the CIC Hut at 10pm some fifteen hours after leaving it. In line with the other literary names on the wall we called our route Failure Is Not An Option (VIII,9). This remarkable book by Gene Kranz describes the Mission Control side of the moon landings, including the return, against all the odds, of the crew of Apollo 13.