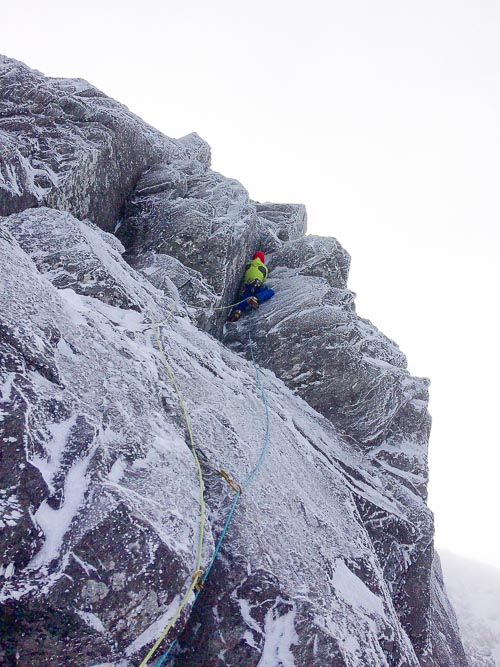 It’s been a difficult season, but as March progressed, good winter climbing was found on Ben Nevis. The problem this winter has been the lack of any base. Any snowfalls have quickly disappeared due to rapid thaws, but the Ben’s altitude preserved more snow, and as the month progressed winter climbing on the mountain began to return to something more close to normal. Until this point, climbing had been largely restricted to the classic ridges, easy-angled terrain or very steep snowed-up rock and mixed routes climbed immediately after heavy snowfalls.

Richard Bentley was one of the first to recognise that conditions were changing for the better in early March when he made ascents of the modern classics Stringfellow on Pinnacle Buttress of the Tower and Strident Edge (with Kevin Roet) on South Trident Buttress. He notes that Strident Edge is a bit of sandbag and is possibly worth VII,8 rather than its given grade of VI,7.

Around this period (March 7), Greg Boswell, Adam Russell and Guy Robertson added a challenging new link up on the East Flank of Tower Ridge. Their contribution was named Frosty’s Vigil (VIII,8) as recognition to Hamish Frost who waited near the top to take photographs. It now appears that their route links Clefthanger, Tripod and The Piecemaker with sections of new climbing between these routes.

Cold weather at the start of March, followed another cold snap in the third week began to produce more typical winter conditions, and the classic ridges – Tower Ridge, Castle Ridge, North-East Buttress and Observatory Ridge saw multiple ascents. Icy mixed routes such as Wendigo and Tower Face of the Comb were also climbed. High up on the mountain the snow banks started to weep ice. This was not enough for the routes on Indicator Wall to form but good enough for the classic gullies such as Comb and Green and Glover’s Chimney. And best of all, in the last week in March, Point Five Gully had several ascents – it was looking like 2017 was going to be a year where this talisman route was not climbed at all, but fortunately that was not to be!