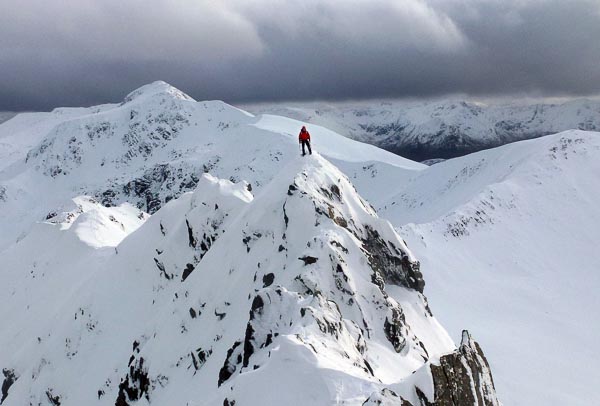 Steve Perry traversing the spectacular crest of Mullach Fraoch-choire above Glen Shiel after making the first ascent of Meshuga (III). This season’s mild and unconsolidated conditions have generally favoured steep snowed-up rock routes rather than more traditional middle grade outings such as this. (Photo Andy Nisbet)

“It’s been that sort of winter, where you either climb steep rocky routes or, on the assumption that all easier routes have turf, you put up with mediocre conditions,” Andy Nisbet writes. “And if you’re looking for easier new routes, you also have to walk a long way. So that explains, at least to the enthusiast, why I’ve walked to the cliff on Mullach Fraoch-choire four times this winter in the fruitless hope for good conditions. It is above 900m and north-east facing; you might have thought…

The first time I went to explore the cliff seen from a distance on A’ Chralaig, it turned out to be the summit cliff seen from an odd angle, and too small to be of interest to me. So I walked along the ridge to Mullach Fraoch-choire and climbed an easy uninspiring line up the central of the three buttresses, but thought the left side of the northern buttress was worth another visit.

I was a bit optimistic and fancied a light sack, so went back on my own later in January. It wasn’t fully frozen at the base, so I moved on to an easy looking line further right. Which was fine, until the buttress ended at an unexpected pinnacle. It was easy to escape off right down a snow gully but I was feeling a bit frustrated, so I finished up a steep groove, which wasn’t very wise on my own. I got away with it (or I wouldn’t be writing this!). To be honest, it wasn’t until I got home and read the route description in the guide, that I realised I’d repeated my own route with a direct final pitch.

The good new line was still waiting and early March was snowy. So I persuaded two good trail breakers that this was the place to go. I should have known that Glen Shiel can get loads of deep snow, but even this was a surprise. The hills did look very white, but we set off anyway. Both Sandy Allan and I thought about turning back but neither of us said anything. And then we’d have had to catch Sarah Sigley who was powering on up through knee-deep crusty snow. By the time we got to the cliff four hours later, I barely had the energy to climb anything, let alone a potentially tricky buttress. So we waded up a mostly easy line that divided the central and north buttresses to reach the Munro crest, and then had some fun descending along it. I remember failing on this Munro when I was 18 years old and hadn’t done much winter hillwalking and the guidebooks didn’t mention that it was one of Scotland’s trickier Munros in winter. We called our line Carry on Nurse (Grade II) in honour of Sarah’s trail breaking, even if the name is a bit personal for Scottish naming traditions.

Four days later (March 9) I’d just about recovered enough to go on the hill again. The others were working but Steve Perry’s job had just finished, and he is a good trail breaker too. In fact the hills were even whiter but some warmer weather had raised the snow level to about 500m and when we got to that height, the snow was sticky rather than crusty, which made better steps for me to follow. We reached the ridge crest in good time (just under three hours) but were amazed just how much snow there was on the cliff. The wind had been westerly and perhaps the snow had been sticky, so it looked like the snow had blown in and stuck to the face. Despite the depth, it didn’t seem avalanche prone, so we descended the Grade I chute between the south and central buttresses, followed by a wade across to our line.

The turf was better frozen and the deep snow cleared fairly easily, so we did manage to wander around and not have to pull over any particularly steep steps. And we actually got four long pitches out of it, the last one finishing up a nice easy ridge to a small top on the summit ridge. Meshuga (Grade III) seemed a suitable name, since you’d have to be meshuga to walk up there four times. And the wind had dropped for the lovely descent down the summit crest, hence the accompanying photo. Phew! No turf was harmed in the making of this route.”