When The Icicles Don’t Hang Straight 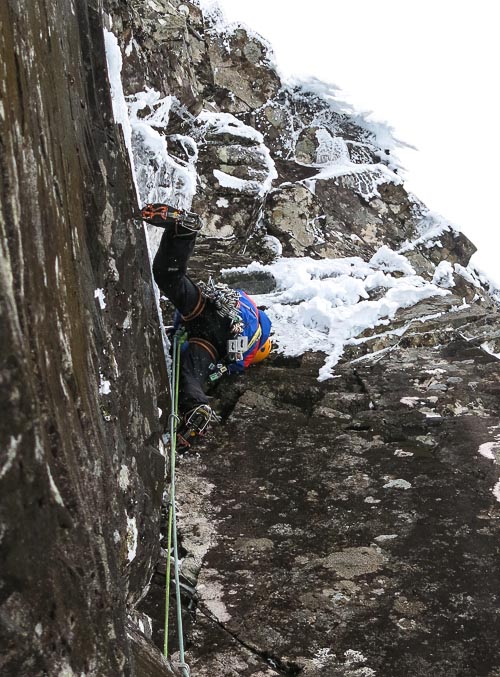 Iain Small leading the ice-filled corner on the second pitch of The Ninety-Five Theses (IX,9) on Church Door Buttress in Glen Coe. The route takes the continuously overhanging groove system right of last year’s addition Gates of Paradise. The double roof with its hanging icicle fringe can be seen above. (Photo Simon Richardson)

So here I am, belayed halfway up Church Door Buttress on Bidean nan Bian wondering why the icicles aren’t hanging straight. It is Tuesday March 7 and it’s gently snowing. Iain Small is above me climbing a vertical ice-filled corner so the icicles must have been blown outwards by the wind. Iain moves up confidently and shards of ice fall out behind me. The angles don’t make sense. If Iain is climbing vertical ground then gravity appears to be operating at an outward angle.

Then the brain adjusts and the worrying truth sets in. The corner that Iain is climbing is, in fact, overhanging. This means that the double tier of capping overlaps at the top of the corner are full blown overhangs.

All this is consistent with the first pitch. The opening V-groove looked innocuous enough, but it turned out to be the wrong side of vertical and only succumbed to extreme bridging with one foot placed flat on the smooth wall on the left and the right front point teetering on a tiny 45 degree sloping smear just a couple of millimetres wide. It took Iain over an hour to unlock the precise footwork to swing left onto an overhanging fin and claw his way up. Each time his probing failed he swung back down and hung one-armed off his tool. It looked a good placement, but when I got there it was a tiny wobbly hook.

Iain is now at the top of the corner and approaching the first overhang. His pace has slowed as the angle becomes more extreme and he searches for protection. Eventually quantity of gear rather than quality persuades him upwards through the bulge to below the second capping overhang. The original plan was to pass this on the left, but blank crack-less rock forces a direct approach over the metre-wide icicle-draped roof.

I can’t bear to watch and carefully pay out the rope. Iain explained afterwards that he used a single notch stein pull to gain the two-centimetre thick ice at the lip. He then released the stein pull, made another placement and hung free with both tools from the lip. The only way to move upwards from a position like this is to make a one-arm pull up but Iain managed to find a knee bar under the roof, which provided enough body tension to make the next placement. His next tool pulled but fortunately it did not rip all the way through and he was able to pull up, place both feet on the ice, and climb the icefall to easier ground. It was an extraordinary set of moves with a massive fall potential.

I arrive at the belay with my eyes on stalks. The physicality – technical difficulty – protection equation does not compute. My immediate impulse is to vigourously shake Iain’s hand. Never have I done a winter route that is continuously overhanging from start to finish. Iain’s lead of The Shape Of Things To Come on Ben Nevis five days before had been an eye-opener, but The Ninety-Five Theses (IX,9) is something else again.

3 Responses to When The Icicles Don’t Hang Straight