The Shape Of Things To Come 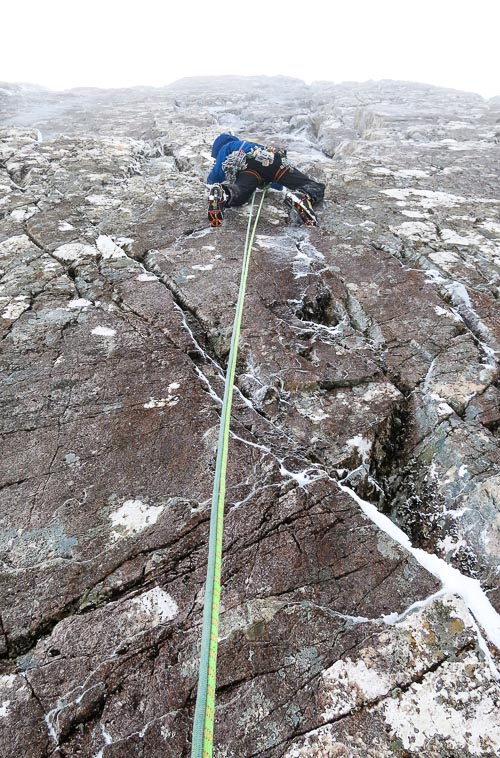 Iain Small on the first pitch of The Shape Of Things To Come (IX,9) on the North Wall of Carn Dearg on Ben Nevis. The route continues in a direct line up the vertical wall above for three pitches and takes its name from the book by H.G.Wells. (Photo Simon Richardson)

I had the privilege of accompanying Iain Small on a journey up the North Wall of Carn Dearg on March 2. This excellent but unfrequented cliff is situated left of The Shroud on Ben Nevis. Steep and rocky and lying low on the mountain, it is a good choice when conditions are snowy high up. And this was just as well because the morning dawned stormy with frequent blustery blizzards that persisted throughout the day.

We had the psychological advantage that between us we had climbed every route on the wall, and we approached the cliff with a cheerful optimism. But I knew from the outset that we were in for a tough time, and even more so after Iain had revealed the plan for the day in the CIC Hut. The objective was to climb a direct line up the centre of the wall in the vicinity of Brave New World, a IX,8 that we had pioneered together six years before.

I use the term ‘we’ here rather loosely, as I just led a very easy section of Brave New World, and I knew on this climb my role would once again be that of helpful second. This route was Iain’s shout and he was climbing exceptionally well – he had ambled up Knuckleduster Direct the day before with Murdoch Jamieson and was back in the hut with hours of daylight to spare.

Suffice to say, Iain floated up his new line. I have never seen him climb so well. The first two pitches were Tech 9 and the third pitch was only fractionally easier. I have never done a climb that is so sustained – there were no moves less than Tech 7 in its 120m length, and there were very few of those. The smooth overhanging groove of the second pitch was the technical crux – the sidewalls were impossibly smooth with nothing for the feet. Above a difficult-to-place peg, there was an unprotected six-metre section on tiny placements in a centimetre-wide dribble of ice and dirt in the back of the impending corner. It is almost impossible to watch someone leading a pitch as bold and tenuous as this, so I focused assiduously on the rope directly in front of me. My greatest concern was being unable to follow the pitch. If I had fallen off when seconding l would have lost contact with the rock and been left hanging free in space.  It would have been game over and we would have had no option but to retreat.

Iain and I have climbed two routes before that have been graded IX. In both instances, Iain considered for several days before giving them their grade. The Shape Of Things To Come was different. As soon as we had abseiled down, Iain said that he was going to grade the route IX,9. I could only agree – the adrenaline was still coursing through my veins when we arrived back at the CIC Hut.

1 Response to The Shape Of Things To Come