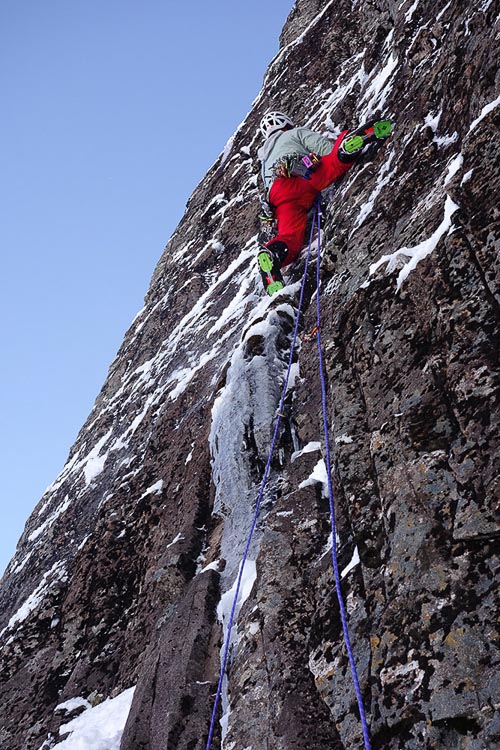 Tim Emmett leading the difficult first pitch of Satyr on Stob Coire nan Lochan in Glen Coe. This sustained IX,9 was first climbed in winter by Donald King and Andy Nelson in December 2010 and was repeated in January 2012 by Guy Robertson, Pete Macpherson and Nick Bullock. (Photo Ian Parnell)

Ian Parnell and Tim Emmett had a great day on Stob Coire nan Lochan on March 3 when they climbed the first three pitches of Satyr (IX,9) before finishing up the final pitch of Central Grooves.

“There was a nice long weep of thin ice falling down the first pitch,” Ian told me. “This attracted us to the route on the day and also it was the most wintry-looking of the harder routes.

Not having a description for the winter ascent we ended up splitting the first pitch at the flake ledge at 20m. Tim led the first bold bit and then I led the better protected Tech 9 crux ‘traverse’ taking a short fall before lowering and starting again.

Then Tim led the linking pitch. I led the offwidth pinnacle-flake, and then with the top pitch holding little snow, I thought best that we finish up the final bit of Central Grooves. Having read up since I’ve got back, I see that the top pitch of Satyr is obviously a tough one with a fall taken on the first ascent – but it was pointless dry tooling it. So we obviously don’t claim an ascent of Satyr, but it was a superb day out with some very interesting and varied climbing and an incredible sunset!”