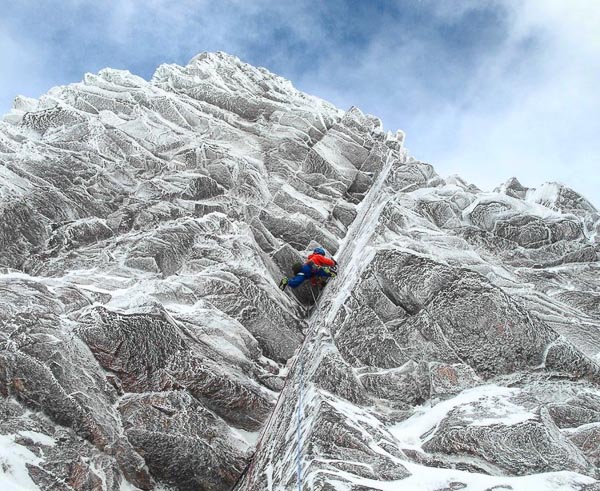 Jon Bracey climbing the first pitch of War and Peace (VII,8) on No.4 Buttress in Coire an Lochain in the Northern Corries. This was the fourth high standard route climbed by the Helliker-Bracey team during a four-day hit from Chamonix. (Photo Matt Helliker)

Chamonix-based guides, Matt Helliker and Job Bracey had a very successful four-day visit to Scotland at the end of February.

With little knowledge of conditions, they headed up to Stob Coire nan Lochan on their first day (February 27) and made an ascent of the test-piece Unicorn (VIII,8). They stayed in Glen Coe the following day and climbed Neanderthal (VII,7) on Lost Valley Buttress. Both routes were first climbed in the 1980s but still hold their own today as challenging routes.

The pair then turned their attention to the Northern Corries where they climbed The Vicar (VII,8) and then finished up with War and Peace (VII,8) on their fourth day. Once again, these two routes from the 1990s are highly respected outings.

Four big routes in four days is a pretty good haul, especially this winter which has had challenging conditions. One secret to Matt and Jon’s success was to choose snowed-up rock and steep mixed routes. These climbs come more rapidly into condition than more conventional mixed or ice climbs, and have been the routes of choice this season which has suffered from not having any prolonged build up to build a helpful base of snow on low-angled ground and ledges.

A good overview of Matt and Jon’s trip can be found on Matt’s blog.