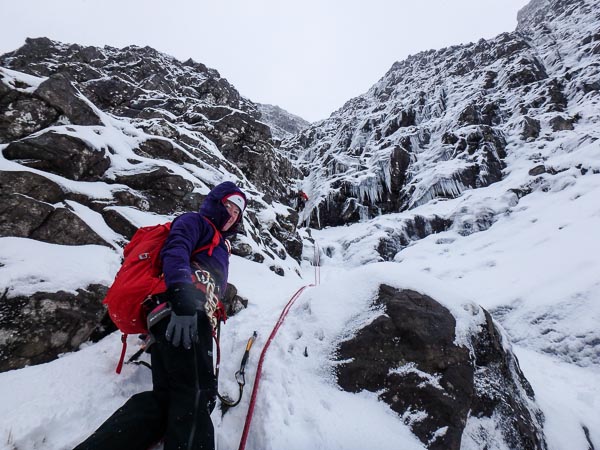 On March 4, John Jackson and Martin Holland headed in to Beinn Alligin with a couple of teams to attempt the classic Grade IV ice gully of West Coast Boomer on Tom na Gruagaich.

“John, Joanne McCandless and Graeme Crowder started up West Coast Boomer, but the ice was thin and it was taking a while,” Martin explained. “So myself, Doug Spencer and Neil Hamlet climbed the buttress immediately to the left. It was typical of the area with sandstone tiers separated by vegetated terraces. The bottom three tiers weren’t particularly helpful in terms of cracks and were climbed on rock and turf with sparse gear and deviations out left to avoid steeper sections.

After four pitches we were able to move back right to overlook West Coast Boomer and the angle eased as we followed the crest of the narrowing buttress/ridge. John’s party came out of West Coast Boomer on to the same buttress after three pitches, and our lines merged.

Salvation Ribs (IV,3) are best climbed with well frozen turf and could save the day if the ice lines are not in condition.”