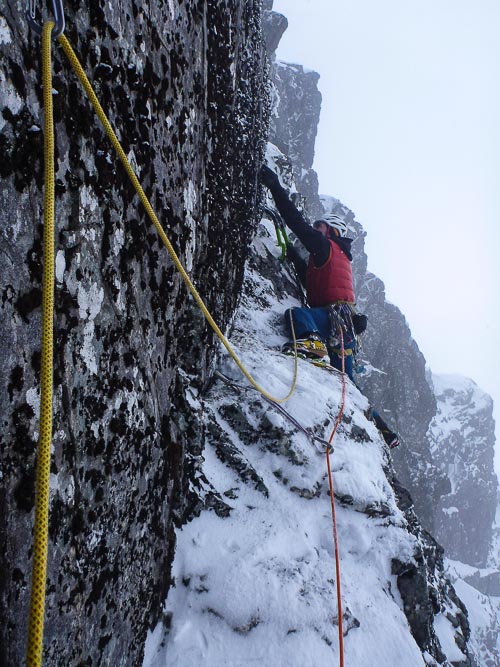 The awkward delicate moves on the second pitch of Cloudjumper (VIII,9) on Ben Nevis. This is the third route added by the MacLeod-Rennard team to the steep area of cliff left of The Great Chimney on the East Flank of Tower Ridge. (Photo Helen Rennard)

“Dave MacLeod and I headed up the Ben last Sunday (March 5),” Helen Rennard writes. “We had been thinking of climbing something up in Coire na Ciste and Dave had kindly offered to belay me on something (I tend to go into seconding mode when climbing with him) but it was looking too black. After an hour or two of drinking tea in the hut – our usual routine when we go up the Ben, which always results in us finishing in the dark – we headed up Observatory Gully to have a look at another new route. The East Flank of Tower Ridge, and higher up by Tower Scoop, are areas that hold conditions later in the season and we’ve climbed new routes up there at this time of year for the last three years, all in February or March.

On Sunday we did a new line left of Red Dragon (which we climbed in 2015), taking a leftward slanting ramp to a short very steep wall (crux). Dave had an exciting time leading this as he hooked a loose block pulling through the crux. He managed to downclimb without it coming off, then went back up again to pull it off in a relatively controlled manner (i.e. it just missed his face). Pitch two traversed off to the right before joining the higher part of Red Dragon above. The traverse looked straightforward but was sketchy and technical. We came across some old gear on the route, on the first pitch and at the first belay, and wondered whether this was from a previous attempt or from folk abbing off Tower Ridge. It turned out it belonged to Pete Davies (who I was out with the following day) and Tim Marsh who had tried the line twice about five years ago. Their high point had been the start of the traverse on pitch two. They had bypassed the crux wall by going round it to the left. We called the route Cloudjumper (another dragon name – Dave wasn’t up for my suggestion of Puff the Magic Dragon) and gave it VIII,9.

We bumped into Greg Boswell, Guy Robertson and Adam Russell at the top car park who were heading up the next day, and gave them some beta about where was white. On the Monday (March 6) Pete and I went into Stob Coire nan Lochan to try something new that he’d spotted. It felt pretty warm walking up and was just above freezing all day. There was a section top right of SC Gully that was about the whitest bit of cliff on the whole crag. We broke out of SC Gully at about half height and climbed a new route up a chimney round the right side of a pillar. This had a very traditional feel with a tight squeeze and some big chockstones (there was a possible through-route, but we went over). It was really good fun. I thought about VI,6, Pete thought V,5, so I was maybe a bit tired! I made it down in time to attend a group interview at West Highland College that evening by a student whose dissertation is on what motivates people to go winter climbing. An interesting topic and it worked well as a group interview.”