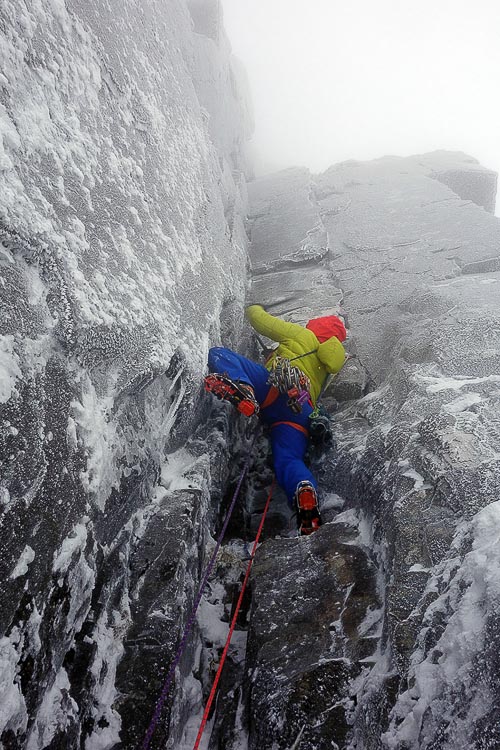 From February 12 to 19, eight Slovenian climbers visited Scotland and teamed up with British climbers to sample the ‘delights’ of Scottish winter. They caught the end of the February cold snap and enjoyed excellent mixed climbing for the first couple of days, and then as the temperatures rose, they resorted to runs, walks and scrambles for the rest of the meet. ”This seems like the ‘real’ Scottish experience,” UK climber Tom Livingstone wrote on his blog. “A week of perfect conditions wouldn’t have felt like Scotland at all!”

The week was organised by Ian Parnell, Nick Colton and the BMC, and was the first half of an exchange meet. Later in the year the British climbers will visit Slovenia in return. The visiting Slovenians, mentored by ace alpinist Marko Prezelj, are all part of the Slovenian Alpine Team, a three-year programme, which creates safer, more knowledgeable and experienced alpinists.

On February 13 the meet visited Stob Coire nan Lochan in Glen Coe. The highlights were ascents of East Face Direct (VII,7) by Tom Livingstone and Matija Volontar, Scabbard Chimney and Crest Route by Will Harris and Andrej Jez, and Central Grooves (VII,7) by Ian Parnell and Marko Prezelj. The following day Will Harris and Andrej Jez climbed Neanderthal (VII,7) on Lost Valley Buttress, and Ian and Marko joined Iain Small for the second ascent of Iain’s route The Past is Close Behind (VIII,8) on the North Wall of Carn Dearg on Ben Nevis. Despite the limited climbing opportunities, the meet was a great success in making contacts and exchanging ideas with the Slovenians.

Several countries, such as New Zealand, France, Italy, Slovenia and the USA run alpine mentorship programmes. Three winters ago I made the first (recorded) winter ascent of the East Ridge of the Douglas Boulder with Rose Pearson who was on the New Zealand programme at the time. Rose was clearly a very capable climber, and led the tricky second pitch of the route, but I was delighted to see that she has now progressed on to far sterner stuff with the first ascent of the West Ridge of Taulliraju in the Cordillera Blanca last summer. This was truly a world-class prize on one of the finest mountains in the range.

Tom Livingstone describes the exchange in more detail on his blog, and makes the case for the UK setting up its own alpine mentorship scheme.