Posted on February 28, 2017 by Simon Richardson 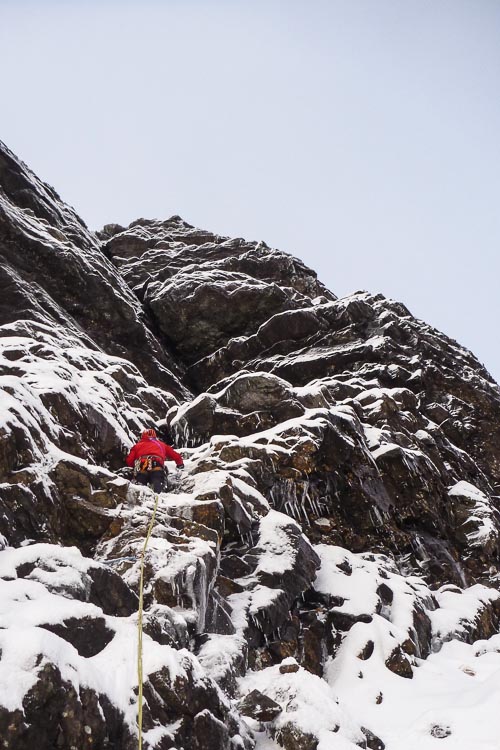 Michael Barnard and John MacLeod made one of the finest first winter ascents this season when they ascended Canopy (VI,6), a Severe chimney-line on Blaven. The route was first climbed by Ian Clough and party in a productive Skye trip in 1968. Michael had tried this line during the Skye Winter Festival in January, but the fourth pitch involves a slight traverse and a split decision meant an abseil off and a need to return as soon as possible.

“With a promising forecast for last Friday (February 24), John was happy to join me for a rematch and a request to bring as many slings and extenders as he could muster,” Michael told me. “We walked in to find the freezing level somewhat higher than expected, but a good layer of snow was coating the cliff and with the weather dry and calm the only real sign of the slow thaw was the occasional drip (and the gloves getting wet quicker than usual).

The big second pitch was as good as remembered and the squeeze section as tight as remembered (I had to empty my pockets this time). Above this the summer chimney-line looks a no-go (hard and gear-less), but a slabby traverse left promises the possibility of an alternative way up around the corner. I love this sort of thing with new routing – following your nose and moving left/right as the cliff dictates. Of course it involves some degree of uncertainty in the outcome, but this is surely what climbing or ‘adventure’ is all about?

From the ledges after the traverse pitch a shallow groove had looked promising, but now on closer inspection turned out to be crack-less and slabby. A good edge encouraged me to start though, and led up to the top bulge, two metres from the top. Plan A didn’t look likely from here, but a long traverse right to the other end of the bulge kept some hope alive. A cluster of pegs eventually encouraged some tricky moves up the right arete to reach easier ground, much to the relief of John who’d been shivering a fair bit by now. We were now past the freezing level and the weather had started to come in.

We walked down later in pouring rain and through now-swollen rivers. Scottish winter eh?”