Posted on February 27, 2017 by Simon Richardson 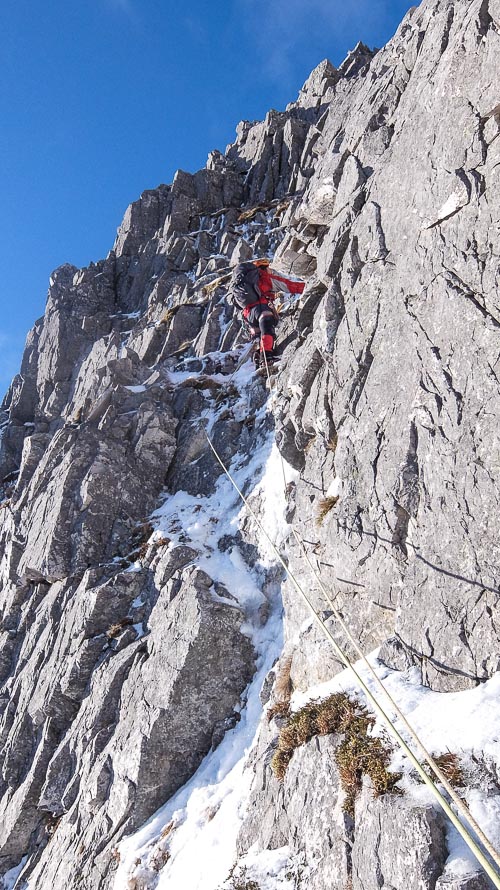 John Higham on the upper section of Headstone Rib (III,4) on the east flank of Beinn na Fhurain in Assynt in the far North-West. The rouge lies to the east of the ice lines of Fhurain Fall and Reign Fall that have a more northerly aspect. (Photo Iain Young)

The 2017 winter continues to be a challenging one. The rapidly varying conditions have not been particularly helpful for those seeking new routes, so I was delighted when Iain Young and John Higham made a good addition to the Assynt hills on February 11. “John and I managed a great day out on Na Tuadhan (the top of Beinn an Fhurain to the north of Conival/Ben More Assynt),” Iain explained. “We had had designs on something in Coigach, but despite iron hard bog and turf, the lack of snow precluded winter climbing. Na Tuadhan throws a long, but easy angled, rocky rib down towards Coire a’Mhadaidh – we soloed up this on snow covered turf with the odd rocky move until we put the rope on for a final pitch through the headwall at about Tech 3 or 4.

Enjoyable mix of turf, ice and quartzite. Fabulous spot – very wild and lonely country to the east of those hills. Having come up via the Conival-Beinn an Fhurainn col, we went back via Loch nan Cuaran, passing the unsuspected (to us at least) air crash and grave site on the plateau there. While aircraft wreckage is sadly not so uncommon, the presence of an actual burial site was very poignant.”