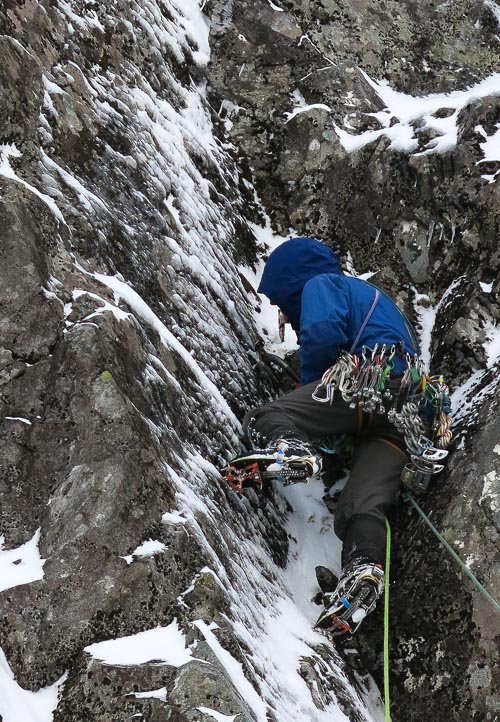 The thin ice master at work. Iain Small about to start a 25m unprotected lead during the first ascent of a new VII,7 on Creag na Coire na Ciste on Ben Nevis. (Photo Simon Richardson)

Conditions change quickly in late March. The day after our ascent of Failure Is Not An Option on the North Wall of Carn Dearg, the temperature was warmer and Iain Small and I had to look higher up on Ben Nevis to find climbable routes on March 23.

The steep area of cliff between Central Rib and North Gully on Creag Coire na Ciste ices readily. I knew there was an unclimbed line to the right of Tinkerbell, so we followed teams heading towards Green Gully before bearing right to the foot of North Gully. Here a steep curving ramp curls up through the lower tier and leads to a steep tower between Tinkerbell and Tick Tock Croc. This gave me an excellent mixed pitch on steep hidden flakes and took us to the foot of the meat of the climb – the thinly iced groove running parallel with the icefall of Tinkerbell Direct.

The groove was typical Iain Small territory – thin ice, often only one to two centimetres thick, and no protection for 25 metres. Above, a single runner safeguarded the steep moves to the girdling ledge beneath the top of the cliff. I expected Iain to traverse right here and climb the hanging corner left of Wendigo’s finishing snow funnel, but instead he continued up a steep narrow V-groove. It looked desperate from below, but was furnished with helpful extruded holds resulting in an, as yet unnamed, VII,7.

The next day (March 24) we were back to climb the parallel groove the right, which is really the true line of Tick Tock Croc. I made the first ascent of TTC with John Ashbridge and Robin Clothier in March 1999. It was a horrible day and conditions were very poor, but we knew we had missed the main event by bypassing the crux groove. This time Iain led it without hesitation leaving me to finish up the prominent hanging corner that he’d spurned the day before. So Tick Tock Direct (VII,7) came into being – a worthy successor to the original climbed 18 years before.