Posted on November 24, 2015 by Simon Richardson 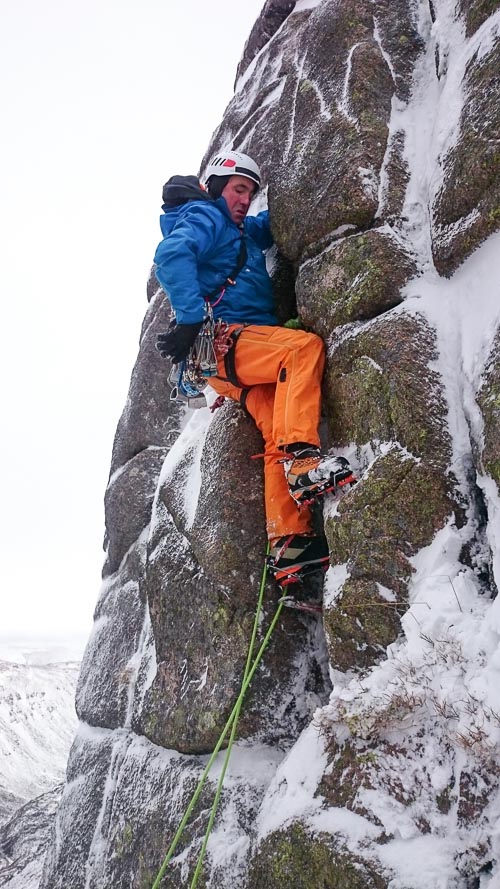 Roger Webb leading the final pitch of Now Winter Bouldering (III,6). This short addition lies on Creagan Cha-no on the east side of Cairn Gorm and is the first new route to be reported this season. (Photo James Edwards)

After a warm autumn the Scottish winter season finally got underway on November 14 when a plunge of cold air covered the Carngorms with the first snows of the season. Coire an t-Sneachda was predictably popular with ascents of Fingers Ridge, The Seam and Pygmy Ridge, and Creagan Cha-no saw some new route activity. James Edwards, Gary Kinsey and Roger Webb linked the Direct Start to Chimney Rib with its unclimbed left arête to give Now Winter Bouldering (III, 6).

“It is the sequel to our other spirited effort on the cliff Once We Were Alpinists,” James explained (with tongue firmly in cheek). “Roger, having just returned from the Alps, aptly compared the route to a series of boulder problems, and the comparison was not without merit. We started up Martin Holland and Steve Langton’s Alternative Start. The route then went to the arete (new) then into the chimney (climbed before) then a new finish (Roger in the photo). So a micro variation on a micro route really, but like Once We Were Alpinists, the moves were very good.”