Book Review – In Some Lost Place 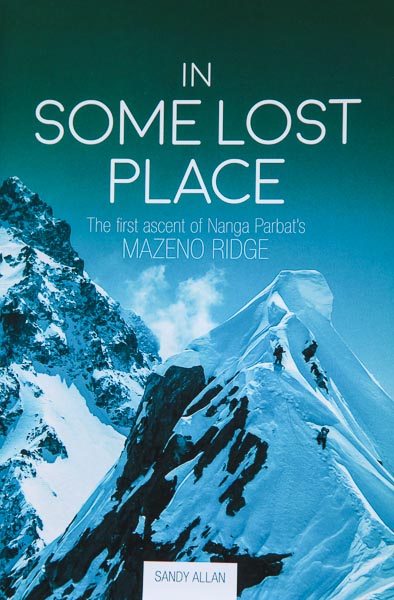 In Some Lost Place by Scottish climber Sandy Allan describes the epic first ascent of Nanga Parbat’s Mazeno Ridge – one of the finest Himalayan ascents ever achieved. The book was published by Vertebrate Publishing in July.

Over the course of 18 days in 2012, Sandy Allan and Rick Allen made the first ascent of the Mazeno Ridge on Nanga Parbat. The Mazeno was one of the last great problems in the Himalayas and had been attempted ten times before by some of the world’s best mountaineers. I need to acknowledge at this point that Sandy and Rick are good friends of mine, but nevertheless, the Mazeno Ridge has been widely acclaimed as one of the finest Himalayan climbs this century. Sandy and Rick were both in their late fifties and not famous names at the time of their ascent, which only adds to the appeal of this inspirational story.

In Some Lost Place is Sandy’s account of their remarkable ascent. Sandy begins by describing his introduction to climbing and his experience gained in Scottish winter, the Alps and the Himalayas through to becoming a guide and climbing Everest and other 8000m peaks. The underlying theme behind Sandy’s book is that the Mazeno Ridge was no lucky accident and was the culmination of his (and Rick’s) 40 years experience in the mountains.

Over 10km long, the Mazeno is the longest ridge on any 8000m peak. To be in a position to attempt the main summit you have to traverse the eight Mazeno peaks – all over 7000m in themselves – to gain the Mazeno Gap. The Mazeno peaks had been traversed twice before, an outstanding achievement in itself, but neither team had sufficient resources to continue to the summit. Sandy describes how a different strategy was devised where a team of six – Sandy, Rick, the South African climber Cathy O’Dowd and Lhakpa Rangdu, Lhakpa Nuru and Lakpa Zarok from Nepal – planned to traverse the ridge which would provide more firepower for the summit push from the Gap.

In the event, it took this strong team nine days to reach the Mazeno Gap in heavy snow conditions, and after an attempt on the summit only Sandy and Rick had the physical and mental energy to try again. Whilst Cathy and the three Sherpas made a difficult descent of the dangerous Schell Route, Sandy and Rick set off with minimal remaining supplies for their summit bid. Deep snow meant it took two days rather than one to reach the top (which they nearly failed to find due to bad weather), but it was the descent down the Kinshofer Route where their troubles really began. Poor conditions on Nanga Parbat that year meant that all teams had given up the on the Kinshofer and there was no trail in place. And then they were unable to light their stove to melt water. The epic four-day descent in extreme avalanche conditions whilst being exhausted and dehydrated is one of mountaineering’s great survival stories. Sandy’s writing is tense and gripping and relief only comes in the final pages of the book when they meet a Czech team acclimatising on the lower part of the route. Even then, Rick and Sandy are determined to continue down under their own steam to complete their alpine style traverse of the mountain.

One aspect surprised me. Sandy and Rick have climbed together for over 30 years and I was expecting to learn more about their relationship on the hill. My experience of climbing long alpine style routes is that you have to work together as an integrated team where communication is key, and the whole becomes greater than the sum of the parts. I didn’t get this impression from Sandy’s account – which paints a picture of two individuals functioning independently – but there again, I have never climbed anywhere near 8000m and this is undoubtedly how the severity of the high altitude environment forces you to behave. At one point on the descent, Sandy expresses his exasperation that Rick is not holding it together and starting to talk incoherently, and then a little later Sandy reveals in a self-deprecatory way that he is hallucinating himself. “Just because my body was failing and my mind was in an altered state didn’t mean I couldn’t make sound decisions. So I decided it was best to keep Snoopy, the witch and the cheery rabbit all to myself, which actually indicated to me the lunacy of my own logic.”

The book is produced to the usual Vertebrate Publishing high standard. Particularly useful are the detailed topos and the excellent maps on the end papers depicting all the routes on the mountain. I found myself continually referring to these to understand how the complex ascent and descents all fitted together.

In Some Lost Place is an excellent book and a worthy record of one of the greatest Himalayan ascents of all time.