Early Repeat of The Good Groove and Much More…

Posted on February 18, 2013 by Simon Richardson 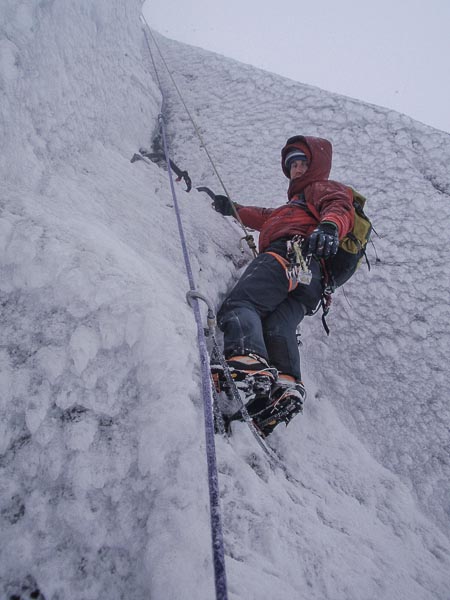 Donald King approaching the crux section of The Good Groove (VII,7) on Ben Nevis. This may be the only second time this route has been repeated since the route was first climbed in March 1993. On the first ascent (in similar icy conditions), Roger Everett belayed from the spike with the sling at the bottom of the photo. (Photo Tim Neill)

Every season I receive an exciting email or two from Tim Neill recounting his latest adventures in the Scottish Highlands. It’s always a long list of impressive new routes and repeats, which is very fitting, because Tim’s enthusiasm for winter climbing is legendary. It’s no surprise to learn that he’s only had one rest day in the last month!

“Just read the post about Raven’s Gully… beautiful photo!” Tim writes. “We had an amazing day on the climb, and capped it off with Hamish autographing my Coe guidebook in the cafe next morning. We put a little album up on our staff facebook page. It’s got to be one of the most memorable classic outings we’ve all done!

On a more recent note, yesterday (February 15) Keith Ball, Donald King and I did your Good Groove on The Comb… mega! What did you belay on at the foot of the crux groove? This threw Keith as he couldn’t find anything nearly good enough, (and made us think it needed more ice). He ran the two pitches together to the platform and luckily a couple of decent runners appeared in the crux section. Perhaps you might describe it as a 50m pitch in the next guidebook? Each of our three pitches seemed to just have one or two runners and plenty of airy climbing. Wanted to do this one for years.

Matt Stygall and Keith also did The Secret last weekend in ‘turbo rime’ conditions. Matt did the original version climbing the full length of the crack like Andy [Turner] did. This was because it was too white to see where you could traverse in. Alas he took a whipper high up… he was gutted, but totally made up all the same.

I read your post about Tony and Rich’s line out of Green Gully. I never got back to you with a line on the photo you sent… I think I failed with the IT skills needed. Anyway, our line starts about 15m higher than theirs. It’s really obvious in the picture of Green Gully in Cold Climbs. It’s the first line of ice after the narrows in the middle of Green, heading out left to belay below the centre of the triangular headwall. The last pitch climbs right of the obvious dark wall on the crest of the comb, linking the snow patches first a little to the right then leftwards up a hidden gully to the big boulder on the crest of the comb. We called it Uranus (between Mercury and Venus) and graded it IV,4.

Keith and Dave Rudkin also had a great few days up in the North-West. As well as West Buttress Directissma on Ben Eighe and Genesis on Beinn Bhan they climbed a few routes on Meall Gorm, including straightening out Rattlesnake.

It’s not all been too crazy though. When I messaged you about Clough’s Chimney, I let my clients have a sandwich below the narrows in Comb Gully while I nipped out left to check… just wanted to make sure!

Getting out climbing most days (one day off in the last month… after Raven’s Direct), but all local to Coe, Bridge of Orchy and the Ben, so got a good idea on conditions. Did Pigott’s on the Comb today…. obviously a bit gloopy, but awesome ice!”