Posted on February 19, 2013 by Simon Richardson 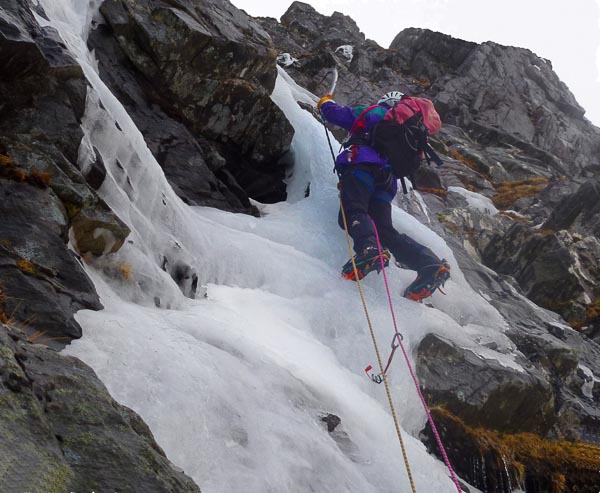 Andy Nisbet on the first ascent of Hopefall (III), which lies between Brown’s Ridge and Bell’s Ridge, on Ben Hope. Nisbet’s partners on the ascent, Steve Perry and Katie Long, had made a rare ascent of Bell’s Ridge (III) six days earlier. (Photo Katie Long)

“After doing a new route on the most southerly Munro, Ben Lomond, at the beginning of the week, it seemed a good idea to do one on the most northerly, Ben Hope, at the end of the week (February 15),” Andy Nisbet writes. “Then when local climber Steve Perry sent me a photograph of an icefall he’d spotted from Bell’s Ridge, which he and partner Katie had climbed on the same day as my Ben Lomond trip, the plan was fixed. It was a bit of a rush as a big thaw had arrived and the icefall’s days were numbered; Steve, Katie and I could but Hope.

From the road, it looked like there was a break and there was certainly less snow than earlier in the week, but the long drive adds a certain commitment. The icefall lay near the top of the wide gully between Brown’s Ridge and Bell’s Ridge. It would have been nice to approach up the stream in the lower section but it was most definitely water. Steve had seen it frozen in the past though, and it looked potentially Grade III. But we started up some unusually steep turf, which forms the base of Bell’s Ridge, before traversing in to the wide gully. By now the turf was well frozen although there was no snow, and the icefall was obviously complete.

The others allowed me to lead as a reward for my long drive. The ice was wet and chewy but took ice screws well, so despite a couple of steep steps it was soon over as a 50m pitch. It was a bit shorter than we’d hoped but still good climbing. Grade I snow for 120m then led to the final crest of Brown’s Ridge. We had been Hopefall on the walk up but now it was a Grade III.

The others headed back down to the car but I still fancied bagging the Munro. There was a huge amount of low angled ice on the north face but I took a line quite near the snow gully, which makes for an easy approach from the north ridge. On the drive back south on Saturday, I stopped at Ben Wyvis and optimistically went to the sometimes very icy Coire na Feola. Other cliffs at that altitude had been very good, and my hope that some ice would have survived the thaw, proved correct. Many lines had gone but Gael Force Grooves was still remarkably thick, and despite the ice being soft and friendly, the grade of IV,4 didn’t feel soft and friendly, but the quality was much higher than the one star in the guide. In case anyone rushes up, the first pitch will have gone now.”

One Response to Hopefall on Ben Hope