Posted on February 20, 2013 by Simon Richardson 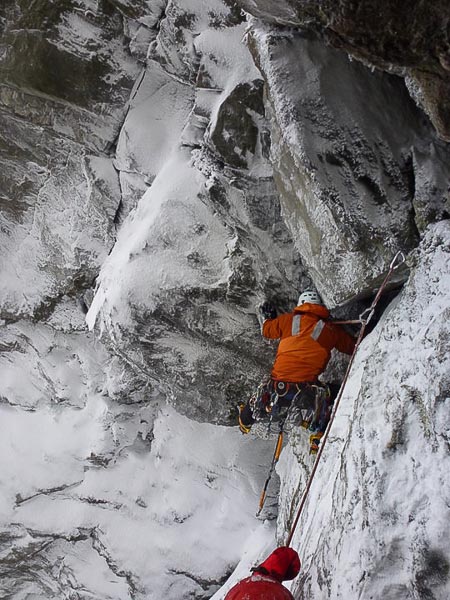 Jake Thackrey struggling to place a hex on the crux of Silence of the Rams (V,6) on The Cobbler. The route was climbed on December 30 when storm force winds were raging across the country. (Photo Andy Bain)

Some late news, but when Roger Webb and I were battling it out on Cairn Gorm on December 30, Dougie Beck, Andy Bain and Jake Thackrey added a good new route to The Cobbler.

“We took the chance and ventured up The Cobbler to a wee line that we have been eyeing up for a while,” Jake told me. “The snow was not too bad, but the gusts were pretty brutal until we got into the gully proper and we were sheltered from the worst of the weather. We climbed up the open chimney with Ramshead Ridge on the left to a huge chockstone and burrowed rightwards through to a terrace and small cave above. We belayed on the terrace and traversed left to blank wall with a crack on the right and moved up to alcove. We climbed over this and continued up blocks to finish on a large terrace under Punster’s Crack. We called the 40m-long route Silence of the Rams and graded it V,6.

More recently, Jake and Andy have been exploring the winter climbing potential on the nearby Beinn Narnain. “We were climbing on Cruach nam Miseag on January 23 in poor weather and could only find a easy route,” Jake explained. “We called it The Lepidopterist (III,4), but we returned on February 3 and climbed the excellent 235m-long Hellenistic (IV,5) – a great route with superb ice and turf pitches.”

2 Responses to Explorations in Arrochar