Posted on January 3, 2013 by Simon Richardson 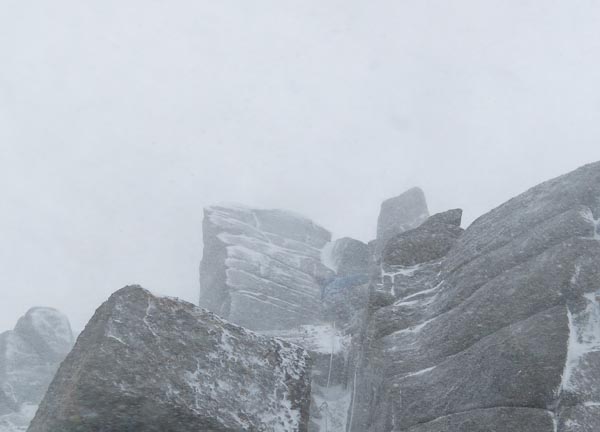 Roger Webb on the final section (common with The Blood is Strong) on a new Grade III on Creagan Cha-no on Cairngorm on December 30. This photo was taken during a slight lull in the wind – storm conditions persisted throughout the day and the route was ironically named Captain Fairweather. (Photo Simon Richardson)

The weather over the Christmas –New Year holiday period was very challenging with high winds putting the hills out of bounds for much of the time (for sensible folk at least). Rather frustratingly, the fluctuating temperatures were on the cool side and conditions at mid-height across many of the ranges were very good, with well-frozen turf, neve and ice.

December 27 was the best day and several teams were busy on Ben Bevis. Iain Small and Blair Fyffe added a difficult new pitch to the left of Rogue’s Rib and Michael Barnard and Ron Dempster added a good new finish to Jacknife on The Douglas Boulder. The Off Road Finish (IV,4) steps down and left from the belay at the end of pitch two, climbs the corner at the back of the ledge and continue up through the obvious square-cut chimney above.

I ventured into the hills on December 30 with Roger Webb, rather hoping that the forecast 80mph winds with 100mph gusts were an exaggeration. We decided to play it safe and make a visit to Creagan Cha-no on Cairn Gorm, which is probably the crag with the shortest approach in Scotland. But even a few hundred metres from the car park we were being blown off our feet. Rather stubbornly (and stupidly perhaps) we continued, reasoning that the east-facing cliff would be sheltered from the westerly winds. Unfortunately this was not the case, and the cliff was a maelstrom of blowing spindrift – the day quickly became a matter of climb something quick and get down as soon as possible.

We climbed the prominent rib to the right of the groove of The Blood is Strong which takes in several technical and steep steps. “This is not a day to break a leg,” Roger reminded me as I struggled on the steep initial wall, and we emerged on to the plateau after two pitches in a whiteout facing into the gale. Roger had wisely put on his goggles below, but as soon as I dug mine out of my sack they immediately filled with snow and ice.

The navigation back to the car was technically easy – we knew we had to travel due west for about a kilometre until we hit a ski fence and then turn south, but walking straight into the wind was almost impossible, and made doubly worse for me as I could barely see through my now useless goggles. For a few minutes I thought that we were going to have to crawl, and the situation reminded me of descending Cerro Torre in a storm ten years ago. But soon enough we found the ski fence, dropped a little height and if it wasn’t for our stinging cheeks and eyes, we would have wondered what all the fuss had been about.

For all those brave and determined enough to succeed on a winter route, whatever the grade, over the holiday period, I salute you. The Scottish hills really bared their teeth, and the weather conditions at times were as challenging as you are likely to meet anywhere else in the world.