Posted on January 4, 2013 by Simon Richardson 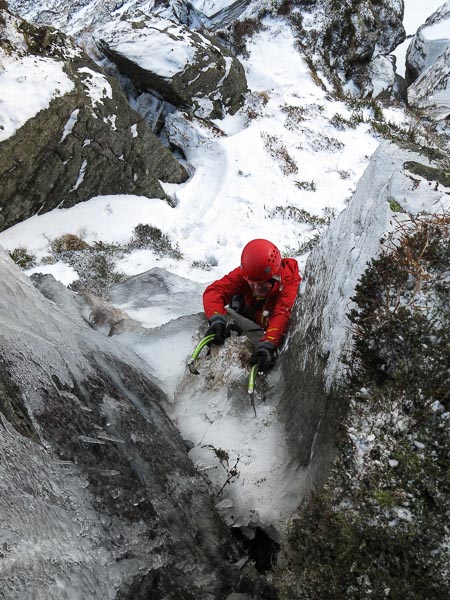 January 1 was forecast to be a good day in the East, so Henning Wackerhage and I arranged to meet up in Glen Clova. We both had (party) commitments the night before which we meant we couldn’t meet up before 10am, but if we were quick and efficient we thought, we may get a route in before it became dark.

I had a hunch that Corrie Farchal may have survived the brief thaw the day before, and sure enough once we rounded the corrie lip it was frozen hard and white with new snow from earlier in the morning. I’d visited the corrie last season with Roger Everett, and knew that there were three prominent unclimbed lines – a gully, a corner and a buttress – so with conditions close to perfect, we set about the challenge of climbing all three.

The first two Grade III’s took an hour apiece which left a couple of hours to climb the buttress which weighed in at a more sustained IV,5. We arrived back at the car a little over seven hours after we’d set off, with nine pitches and over 400 metres of new ground in the bag. It just goes to show that good weather and amenable conditions can be everything when it comes to the Scottish winter game!