Ice Climbing in the Sun 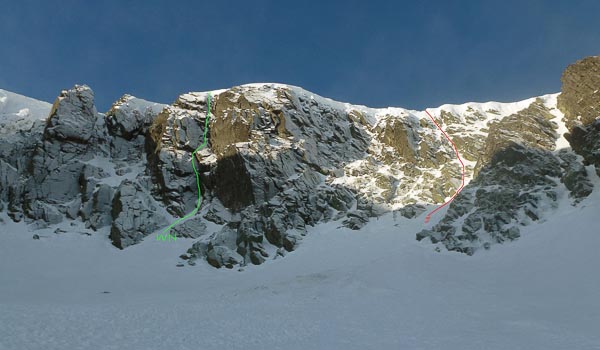 The right side of Garbh Choire Mor on Braeriach. The line of Jackpot (III) is shown in red (marked J), and (a bare) White Nile (V,5) in green (marked WN). (Photo Andy Nisbet)

Since New Year’s Day it’s been a lean time in the Scottish mountains with astonishingly high temperatures for early January. The crags have been largely stripped with just easier gullies in the high corries remaining intact. On the plus side, many cornices have collapsed, and as temperatures dropped at the end of the week, Andy Nisbet was quick to take advantage. Here is Andy’s account of his most recent adventure.

“If you ever think there’s hardly any snow around, then go to Garbh Choire Mor, Braeriach. Which is what I did yesterday (January 11). Even I wasn’t confident, so I didn’t try hard to find a partner once my regulars were unavailable, but I should have known it would be fine. The idea was to climb a line which I’ve been in three times before to try, but always there’s been a huge cornice, even last year when all the cornices were small except that sector where they were massive. I even took a shovel in one time but chickened out of tackling a 10m overhanging monster. So this time it was fingers crossed. In fact the decision was only made when I got up in the morning and could see bright patches in a cloudy sky despite the latest Met Office mountain forecast which was much more pessimistic than the mwis one from yesterday. The real worry was that if it was misty, then I wouldn’t see how big the cornice was until I was committed on the route.

In the end I didn’t start cycling until 9am, but even by then it was looking promising. The track was in good nick, mostly dry and not too icy, so I made Loch Einich by 10.30. By then Braeriach was clear of cloud, as were the Gleann Einich crags, but there were completely bare so I didn’t look too much. The first real snow was at the exit out of Coire Dhondail but that was rock hard so it was crampons on. There didn’t seem to be much verglas around, whereas Cairn Gorm was encased in it, as I’d found yesterday in Coire an Lochain, so I took the crampons off again and headed up to Braeriach South Plateau top. I had thought about descending Solo Gully but the mist suddenly came in, so I went for the longer safe option. It was slightly spooky descending as the snow was concrete hard so I turned and faced in. There were good views on the main cliff, and there were some breaks in the cornice, but my sector, which is to the right of Phoenix Buttress, stayed hidden until I was right down in the corrie.

Now I was really happy; it looked like the gamble had paid off. There was plenty of snow around and a good break in the cornice directly above my route. Judging by the debris I was climbing through, it must have been spectacular when it fell. Not only that, but a nice ribbon of ice down the intended groove. So the route turned out to be quite easy, but still sustained enough to scrape into Grade III. And it was only one o’ clock. I did go over to look down Phoenix Gully, and it looked in good nick (unlike White Nile which was bare), but my legs were protesting so I headed home. I had a great day so I think I’ll call it Jackpot, and the route was in the sun.”

Simon Richardson is a passionate Scottish winter climber
View all posts by Simon Richardson →
This entry was posted in New Routes and tagged Andy Nisbet, Braeriach. Bookmark the permalink.