Posted on December 29, 2012 by Simon Richardson 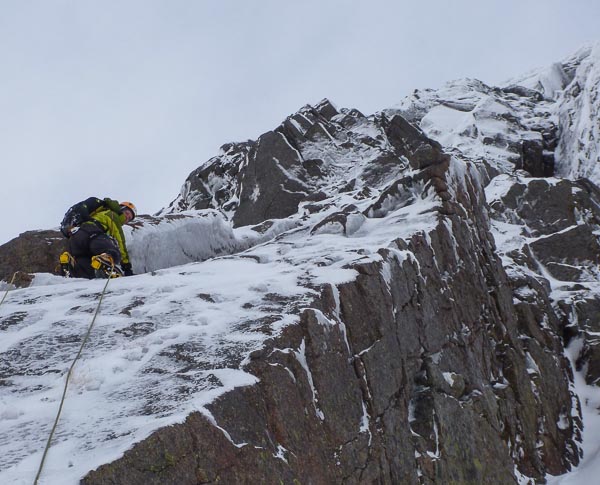 Simon Yearsley climbing the initial ramp on the first pitch of Sentinel Buttress (V,6) on Beinn a’Bhuird during the first ascent. The route was in very icy conditions, with heavy rime and hoar on most of the buttress. In leaner conditions the route may be significantly easier… or significantly harder! (Photo Neil Silver)

Neil Silver and Simon Yearsley added a good new route on Beinn a Bhuird on December 27.

“I’d always wanted to have a look at Dividing Buttress on this beautiful and remote mountain (no new routes had been added to this cliff for over 10 years),” Simon explained. “But making the long trek in on one of the shortest days of the year was always going to need good travel conditions. Having looked at the weather patterns over the previous few days, it seemed that cycling & walking conditions could be just about perfect for the long approach, and we were really pleased to have light snow on the cycle-able part of the track, and then beautiful iron hard neve once we’d left the bikes at the top end of Glen Slugain. The neve continued all the way to the very bottom of the buttress and even the early wind died down to virtually nothing once we were standing at the base of his complex cliff.

We chose the prominent buttress between Sentinel Route and Sentinel Gully (both climbed on the same day back in 1970 by two ropes of strong Aberdonian climbers) which looked like it could provide a pleasant line – steepest in its lower part then easing towards the top of the buttress. The climbing in the first two long pitches was excellent, with a fun mix of icy ramps, thin slabs, a couple of very awkward ribs and a fierce pull out of the top of the crux groove. The whole buttress was liberally plastered in some of the thickest rime and plated ice that I’ve seen for a long time, and on the easier angled upper section, this became so thick you could virtually climb anywhere on first time placements.

We reached the top with an hour or so light to spare and superb cloudscapes above the huge Beinn a’Bhuird corries. On the long walk out we chatted about the grade and the name: the technical sections were all about 6, but the route somehow didn’t seem a ‘big’ enough route for an overall VI grade… but then again the conditions made the climb difficult to protect, and you certainly wouldn’t have wanted to fall off any of the really hard sections… but overall the route wasn’t sustained with plenty of nice rests. All this made for excellent chat/debate/banter on the long walk out, and what better way to spend a few hours at the end of fantastic day! We settled on a grade of V,6, but the route may well be much harder (or possibly much easier!!) under less icy conditions, such is the fickle nature of Scottish route grades! As for the name – the route took the obvious buttress between Sentinel Route and Sentinel Gully – so the simplest and most elegant solution was ‘Sentinel Buttress’.”