Posted on December 28, 2012 by Simon Richardson 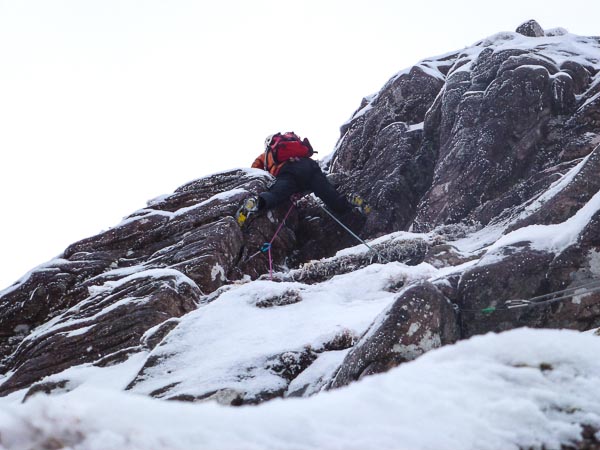 Jonathan Preston moving through the barrier rock band on the second ascent of Potala Buttress on An Teallach. This is probably the point where a sling for aid was used on the first ascent by Dave Broadhead and Des Rubens in January 1987. (Photo Andy Nisbet)

Jonathan Preston and Andy Nisbet made a repeat (and first free ascent) of Potala Buttress, in Toll an Lochain of An Teallach, on December 27.

“It was a route that had always interested me, in that it was the only true face route on An Teallach when I offered to write the next Northern Highlands guidebooks in the late 90s,” Andy told me. “OK, there was 1978 Face route, but it was a route following obvious features on a huge face (named as a piss-take on 1959 Face Route on Creag Meagaidh, which itself was named after the 1938 route on The Eiger, although hardly in the same class). I asked Dave Broadhead, who with Des Rubens made the first ascent in 1987, if it was really old Grade IV because it looked somewhat steep and intimidating, and he said yes. I still had my doubts, since it used an aid point, and these lads didn’t resort easily to such things, but I had to take their word for it and graded it IV,5 in the guide.

Knowing conditions were so good on An Teallach, Jonathan and I decided that they would have survived the pre-Xmas thaw and might be even better on this high route. We were wrong in fact, but instead of there being too little snow, there was too much, and the face was well plastered with fresh crusty stuff. Not that it put us off, but by then we were committed after the long approach up the lower slopes and gullies which were actually in better nick. Their description was brief and factual, forcing us to basically ignore it and find our own way, although in retrospect we probably followed the same line. It did start as for our recent route Rongbuk but soon broke off right to give a harder but similarly scary first pitch. Jonathan then led up to a barrier rock band where we presumed the aid point was used. There were several breaks in this, with things looking harder the further right you went, but all being plastered in snow so you couldn’t really tell. He decided on the furthest left, quite close to Rongbuk in fact, and it turned out to have good cracks, a real bonus after the unprotected ground below, but still the technical crux.

With all the clearing of snow, the climbing was slow and we were still less than halfway up the route with only two hours of daylight left. Plus the description said “continue without difficulty” and the ground above was still steep. But it was clearly necessary to add some speed so the cautious approach was put to one side and we finished up a fine icy groove still in daylight. Not that it’s all over on An Teallach, since were halfway along the Corrag Bhuidhe pinnacles in fading light. Last time we’d reversed them and descended Constabulary Couloir; this time we decided to head to Lord Berkley’s Seat and over Sgurr Fiona. This change of plan nearly misfired when we decided that snow conditions were sufficiently good on the south side that we could traverse round Sgurr Fiona. Suddenly the mist came in and we lost touch with each other in the rush. I didn’t have a map, as I thought I knew An Teallach well enough, but was heading down towards a col when I suddenly remembered it led to an outlying top on the Shenavall side. Feeling a little fortunate, I went back up and met Jonathan. I did remember the descent gully and we got most of the way down to the sacks without torches, although a full moon did delay darkness. By the time we got back to the car, it felt a long day. As for the grade, old IVs were often hard and we thought this one deserved V,5.”

Simon Richardson is a passionate Scottish winter climber
View all posts by Simon Richardson →
This entry was posted in Repeats and tagged An Teallach, Andy Nisbet, Jonathan Preston. Bookmark the permalink.