The Thread of Doom

Posted on December 25, 2012 by Simon Richardson 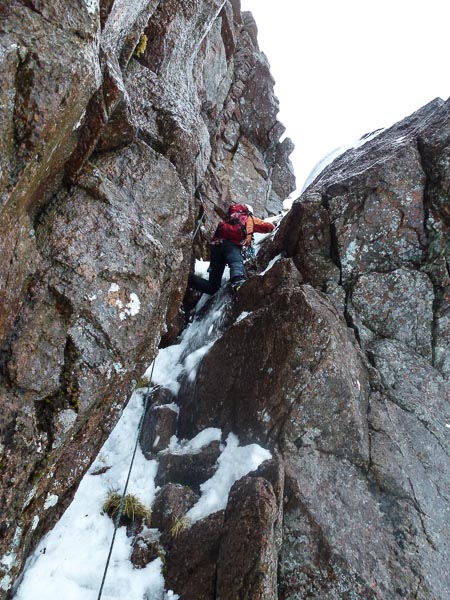 Jonathan Preston on the first ascent of a new III,4 on Stacan Dubha in the Loch Avon Basin on Christmas Eve. Conditions after the weekend thaw were excellent with good neve and freshly formed ice. (Photo Andy Nisbet)

Andy Nisbet is on a roll at the moment and has made a series of good ascents during this unsettled period of weather. Scottish winter climbing has always been about being in the right place at the right time, and Andy’s recent run of routes is a textbook example of how to play the game. Here is his latest story from December 24:

“A thread on UKC told everyone how dangerous it might be and how awful the conditions were, but conditions were great and walking conditions brilliant, with a total cover of neve in the northern Cairngorms. The avalanche forecast said considerable, but you’d have needed dynamite to move any snow. The “monk of doom” said freezing level at 1200m, but it had been freezing on Cairn Gorm most of the previous day plus overnight and the weather pattern was to get colder. And there was no-one on the hill. Was I missing something? Or was this a dream.

So Jonathan Preston and I ignored it all and went anyway, over to Loch Avon and Stacan Dubha, where we’d spotted a line this time last year. Between that route and The Shuttle was a big bay capped by a smooth overhanging wall. From low down we saw a potential Grade VIII but not of interest to us. But then higher up we looked across and saw a bizarre deep fault, a hidden turf-filled chimney that cut through the wall and seemed like a miracle. So that’s what we went for. Conditions were bare on the steep walls but the easier ground and especially this chimney were full of ice and the turf was well frozen. Some lower walls, which just made tech 4, led to an easy diagonal ramp, which led left to the chimney. Even when approaching, it seemed impossible that it could exist and I admit to thinking we were in the wrong place. But it was there, and Jonathan led up to uncertain ground. But it was our lucky day, so an easy groove led up towards the top. OK, the line isn’t continuous, but for a Grade III,4 it does cover some unusual ground. And we were alone on Christmas Eve in the Loch Avon Basin!”