Posted on December 24, 2012 by Simon Richardson 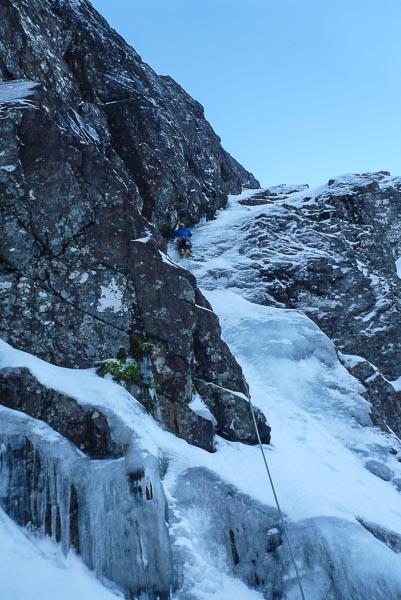 Blair Fyffe on the initial ramp of The Copenhagen Interpretation (VI,7) on South Trident Buttress, Ben Nevis. This route benefitted from icy conditions – The Ben has been particularly icy at mid-altitude elevations over the last couple of weeks, and the current fluctuating temperatures should continue to see the ice building over the coming days. (Photo Helen Rennard)

On November 3, Blair Fyffe made the probable first winter ascent of Blue-Nosed Baboon on Garadh Buttress on Ben Nevis. This summer VDiff went at a winter grade of V,5 and is described on Blair’s excellent blog. Whilst climbing this route Blair noticed a prominent line starting up a ramp on the other side of Coire na Ciste on South Trident Buttress. Blair assumed this was the line of The Minge (VII,8), but later study of the guidebook revealed that The Minge took a line further left.

Wind forward to December 18 when Blair was climbing on The Ben with Helen Rennard. They decided to take a look at South Trident Buttress and the result was The Copenhagen Interpretation, a good five-pitch route taking the initial ramp, followed by two difficult pitches up grooves and cracks leading to easier ground in the vicinity of Joyful Chimneys. The pair was assisted by consolidated snow-ice on the slabs on the second pitch that linked the two crack systems, and the crux crack above may have been made easier with a good coating of ice.

“The Copenhagen Interpretation is an interpretation of the unusual mathematics of quantum mechanics,” Blair (a PhD Astrophysicist) told me. “The ephemeral and uncertain world of the sub-atomic particles shows similarities to the transient and uncertain world of Scottish winter climbing conditions. Both worlds, although challenging, and in some ways always alien to us, have an other worldly beauty.”