The End of the World

Posted on December 22, 2012 by Simon Richardson 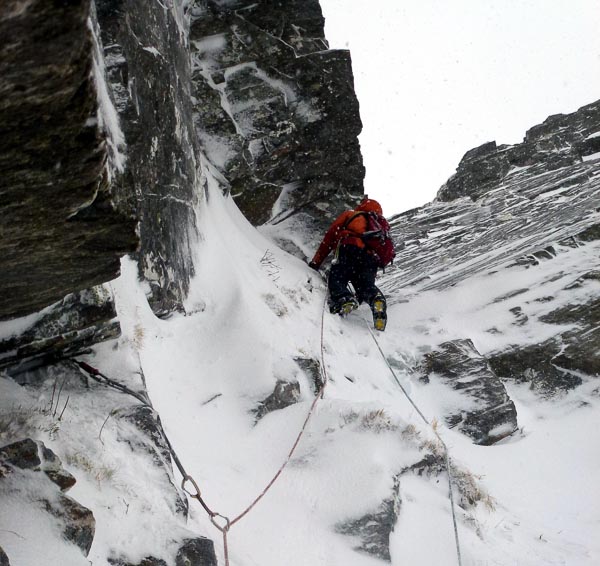 Jonathan Preston about to enter the big V-Groove during the first ascent of World’s End (III,4). “This photo isn’t as good compared to the great potential one looking down,” Andy Nisbet told me. “If only Jonathan or Dave carried a camera!” (Photo Andy Nisbet)

The wild weather, high winds and deep snow has shut down almost all winter climbing over the past few days, but yesterday the indomitable Andy Nisbet added a couple of new routes to Beinn Fhada with Jonathan Preston and Dave McGimpsey.

“The forecast was poor with wind and rain or snow clearing from the south during the day,’ Andy explains. “Judging by UKClimbing posts saying how unfrozen the turf was in Arrochar, but our (Dave McGimpsey, Jonathan Preston and I) recent experience on An Teallach of turf being frozen at sea-level, conditions seemed better but the weather worse the further north you went. So we compromised in the middle and with a south-east wind, also went as far west as possible. Beinn Fhada was the plan and a big groove, which I’d spied a couple of years ago but chickened out of soloing in deep soft snow. We arrived in rain and wind and set off in the expectation that it would soon stop. As we got wetter higher up and the rain turned to driving sleet, it was one of those days you wonder about your sanity. But almost miraculously the wind dropped the moment we stepped into the upper corrie and suddenly the turf was frozen.

The big groove in the leftmost buttress of the corrie needed ice, and there was certainly ice around, so suddenly our faith seemed justified. We soloed up to the first step and roped up. It all seemed steeper than expected but even this awkward step had enough ice. Then there was plenty of icy turf up the groove and a good warthog runner. I could see ice flowing out from the base of the main V-shape but there was no more rope. The groove is clean-cut with a 10m left wall and at least a 20m-high right wall. With a ribbon of perfect ice in the back, it could have been a total classic if only it were a bit longer than 20m before reaching easier turf and a final bulging exit. A final optional mixed pitch led to the top and a decision as to whether two hours was time for a second route and back to the car in daylight. Of course it was! After all, the world was due to end that day so we’d better get some more climbing in. The route was named World’s End, Grade III,4.

The gully bounding the buttress had looked like an easy descent but again turned out to be steeper than expected, though with continuous snow even over a couple of steeper steps. It actually made a good Grade I at least 150m long and seemed worth recording (Mayan Gully). I had climbed the next buttress to the right so we chose the next one right again. We had the ropes but the plan was to solo. Again it turned out to be steep and with me struggling on the first icy bulge, Jonathan chose to solo the gully to the left (The End is Nigh – Grade II/III). Higher up, there was an awkward move left over a bulge with only one good placement. If that one had come out, the Mayan prediction for Doomsday (Grade III,4) would have been right, but fortunately we’re not superstitious. And we nearly made it back to the car in daylight.”