Even Better Conditions on An Teallach

Posted on December 21, 2012 by Simon Richardson 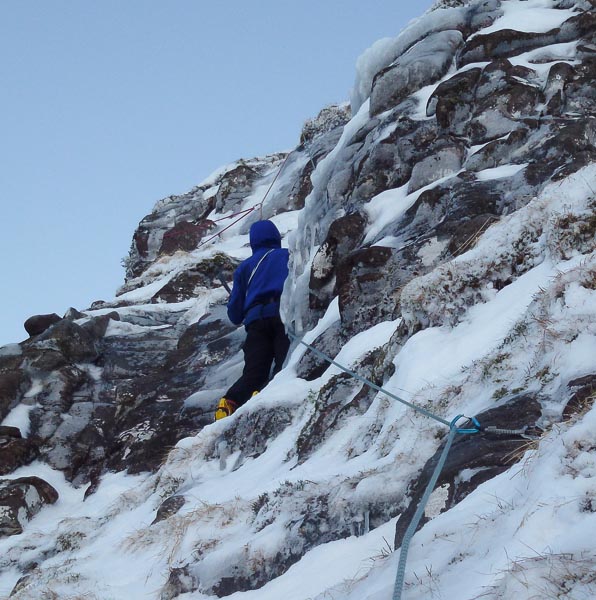 Dave McGimpsey climbing pitch 3 during the first ascent of Rongbuk (IV,4) on Toll an Lochain on An Teallach. This 500m-long route makes a fine companion to Potala Buttress (IV,4), first climbed by Des Rubens and Dave Broadhead in January 1987. (Photo Andy Nisbet)

Andy Nisbet returned to An Teallach on December 18 with Jonathan Preston and Dave McGimpsey to make a fine addition to one of Scotland’s largest cliffs. Here is Andy’s story:

“There was so much snow on An Teallach a week ago that a good thaw could only improve conditions, and not the opposite as a rather negative thread about NW conditions on UKClimbing had concluded. Toll an Lochain is arguably the second biggest cliff in Scotland, although there are steeper contenders, and I love climbing there. There was an obvious gap on Potala Buttress, and Jonathan and I had previously looked at it, but conditions had been deeply plastered snow and it was a surprisingly intimidating face. This time we expected conditions to be icy and perhaps the smooth slabs would be climbable.

With Dave roped in, we left the car at first light (none of this walking in the dark for us). Again the turf was frozen down to the road and we hoped it wasn’t just valley frost. But as we gained height it stayed frozen, so surely the snow would have to follow suit. Despite the nagging doubt that a temperature inversion would warm things up, it didn’t and conditions looked very promising. No big build-up and the lower buttresses had definitely thawed, but an ice fringe on every turf ledge high up.

We geared up in the corrie bottom and made the big mistake of wearing all the clothes (well it is winter). Of course forgetting that it’s 1000ft of Grade II to reach the start, and sure enough we were roasting on a cloudless, windless day. The snow was crusty in places but very solid where water had dripped down. But we got to the toe of the buttress and its smooth slabs, so felt a bit guilty starting round to the right (later relieved to find Potala Buttress starts there also). I volunteered to go first and was even allowed to, but then I did have a fair idea how to avoid the line of Potala Buttress.

The climbing was well turfy, even as I trended left away from the other route. I did have a warthog and a hook, but thinking I should save them for a hard move, I only placed the hook with 40m of rope out. Jonathan’s next pitch had some steeper icy moves but 8 runners. After Dave’s next pitch, it looked like the ground was easing but the route still had to offer a fine ice-filled short gully and a perfect crack just over the initial bulge when the rope had just run out. Dave and Jonathan then led simultaneously (so we led two pitches each!) to the summit ridge. What great views there were of the Beinn Dearg range.

With a choice of descents, we decided to reverse the bad step (which isn’t bad if you know how to avoid it) and then descend the endless Constabulary Couloir. Not endless if you’re climbing up full of enthusiasm, but at the end of the day when the light is fading. The route was called Rongbuk after another Tibetan monastery nearer the mountains. We debated over the grade and agreed on IV,4. It must be at least 500m if you count the long approach.”