The Rebirth of Cool

Posted on December 19, 2012 by Simon Richardson 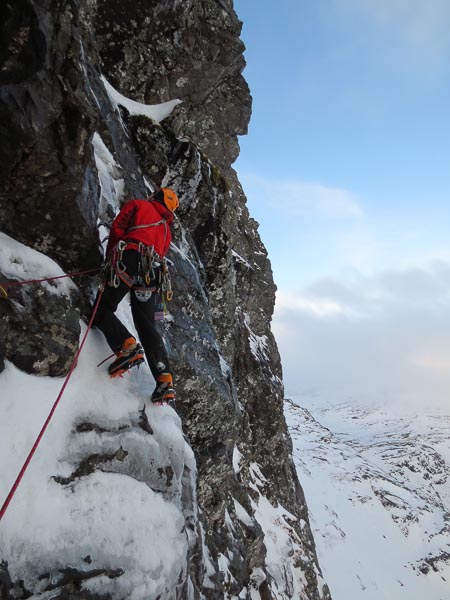 Andy Inglis finding a way through the fourth pitch during the first ascent of The Rebirth of Cool (VII,7), on the Upper Cliff of Coire Ghranda on Beinn Dearg. (Photo Guy Robertson)

Guy Robertson and Andy Inglis added a good new route to Coire Grandha’s Upper Cliff on Beinn Dearg on December 17. Guy has very made this rarely visited cliff very much his own with a string of impressive routes in recent years. “Unsurprisingly this is one of the places we still need to get pictures for the book [a new volume on Scottish mountain routes], and unsurprisingly we got a fantastic new route!” Guy told me.

“The Rebirth of Cool (VII,7) takes the easiest line up the steep and complex area of overhanging grooves and bulges immediately right of Tickled Rib, another of my own routes from ages back.  The climbing was typical of the crag – never that steep, but never easy, and a superb mix of thin ice, turf and rock.  For a while I thought that – unusually for this cliff – the whole route was going to be well-protected, but a sustained section sketchiness a good few metres out from a tied off peg on the third pitch soon put paid to that.  As ever, it was great to get a rare opportunity on a day that many folk seemed to have written off as too warm.”