Posted on December 19, 2012 by Simon Richardson 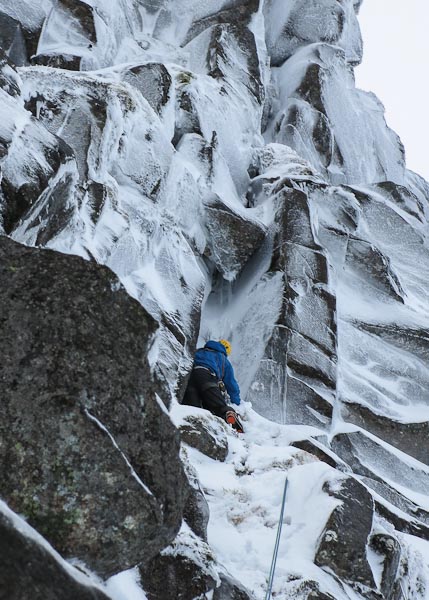 Roger Webb moving up to the base of the cave pitch on the first ascent of Insurgent (VI,7) on Sinister Buttress, Lochnagar. This steep buttress is the least climbed feature in the Southern Sector. (Photo Simon Richardson)

Lochnagar is my local crag, and over the years I have climbed almost all of its features, often by multiple routes. But there was one buttress that had eluded me – Sinister Buttress in the Southern Sector. Greg Strange wrote in his 1978 guidebook that it is “named for its associations and its rock which is lichenous and vegetated.” The term ‘associations’ refers to a bad accident in 1949 when Cairngorm pioneer Kenny Winram fell whilst attempting the first ascent of the buttress. The route was finally climbed in summer by the crack team of Bill Brooker and Tom Patey in 1955. Sinister Buttress is deceptively steep, and twenty years later, mixed master Norman Keir and D.Marden made a futuristic winter ascent approximating to their line.

With a high freezing level forecast for Sunday December 16, Roger Webb was keen to visit Lochnagar and give Sinister Buttress a go. The result was Insurgent (VI,7), a new and exciting four-pitch line with an intricate second pitch that tested both leader and second alike. We started early, but even so we it was night time by the time we finished on the plateau, well satisfied after finding away up the least known of all Lochnagar’s buttresses.