Posted on December 18, 2012 by Simon Richardson 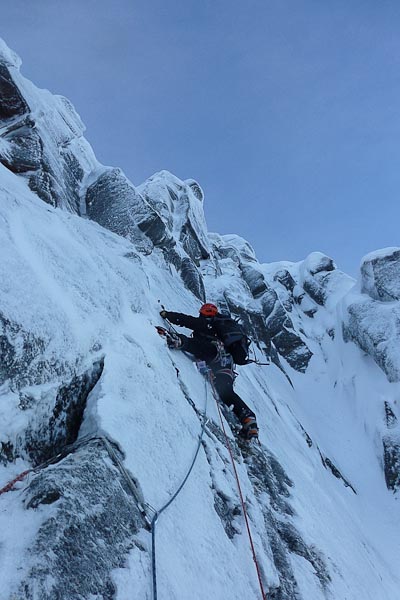 Dafydd Morris on the crux traverse of Gallows Groove (VI,7) on Creagan Cha-no on the east side of Cairn Gorm. The prominent gully of Fingers and Thumbs with its steep headwall can be seen just to the right. (Photo Matt Buchanan)

Dafydd Morris and Matt Buchanan made an excellent addition to Creagan Cha-no on December 16. “I managed to drag myself out of my sick bed to head back to Creagan Cha-no with Matt Buchanan on Sunday,” Dafydd told me. “I couldn’t face a long walk in, and having seen how good the climbing was when I did Anvil Corner a few weeks ago this seemed like a good option. We decided on a route on Arch Wall. We took the initial narrow chimney of the route Arch Wall to a ledge, and then followed the lower of two grooves rightwards across the steep slab (crux) on thin moves aiming for a turfy blocky chimney, and continued up this to the top.

There was very little gear on the crux across the slab, only really turf stuff was available. The cracks were surprisingly blank, with not much for the feet, and didn’t have the hoped for bomber hooks I love so much. It took a lot of clearing too, and felt harder than Anvil Corner on the day. The route name derives from the fact I took a slight tumble on the lead and Matt thought I looked like I’d been sent to the gallows with my falling position!”