Posted on February 25, 2013 by Simon Richardson 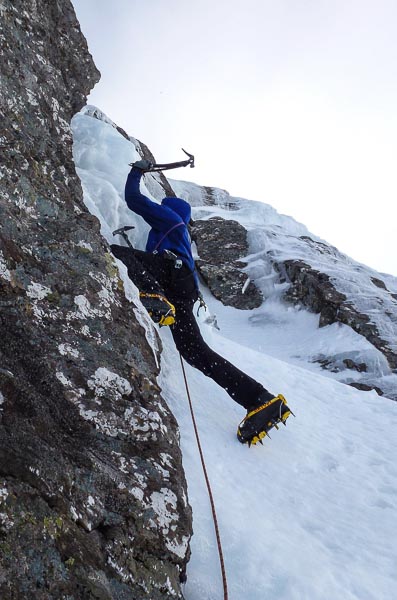 Dave McGimpsey on the first ascent of Begging for More (III,4) on the West Face of Aonach Beag. Although rarely visited, this cliff has some of the most reliable high altitude ice climbs in the country. (Photo Andy Nisbet)

“When the big thaw was ending, and after my Ben Wyvis day when the ice was shrinking fast, a high safe choice seemed best,” explains Andy Nisbet. “The Central West Face of Aonach Beag has some of the most reliable ice in the country but is rarely visited so plenty of choice for exploration. Maybe folk think it’s a long walk but only an hour and a half from uplift in the current good walking conditions. The face doesn’t look very impressive from the Aonach Mor-Aonach Beag col but actually it’s much further away and therefore bigger than appearances suggest. And many of the ice lines are in grooves so while the face looks like snow ledges from a distance, the snow ledges are 50-degree snow and continuing up the icy grooves feels natural. But as a word of warning, in current conditions this is probably the most serious approach in all Scotland, close on a kilometre of Grade I hard snow to the far end, up, down and traversing where one trip would be terminal.

When Sandy Allan and I arrived at the col on Tuesday (February 19), the face was obviously icy enough but we had expected some mixed climbing up our objective, which was a small smear in an old April picture. But as we started the long traverse approach, we didn’t even get near before spotting another line of ice and setting off up that. This was to the right of a big corner we’d climbed before (Cryogenic Corner) and another ice line to its right (Glycerol Gully). We soloed a bit and then roped up for a long pitch. I stopped when I ran out of rope and Sandy set off, not for long. “There’s a big gap here”, he said. “We’ll have to abseil”. Even from 10 metres away, I couldn’t believe him, but he was right. The route was split by a deep snow gully crossing it diagonally, and now I remembered it. There was a much thicker icefall directly opposite and from below it had looked continuous. So Sandy made a snow bollard and abseiled tentatively into the gully. The ice pitch out of the gully was quite steep, the next pitch easier and the third went over an awkward ice bulge on to icy mixed ground to finish. For a minute, we wondered if this was two shorter routes or one longer one, but it became the longer Glacies Interruptus (220m IV,5).

The diagonal gully became a descent route but still pretty steep so by the time we had descended and traversed to our original objective, our legs were feeling the strain. But we were inspired by the fantastic conditions and what we had expected to be icy mixed was two long pitches of fat ice on the buttress left of Poached Egg. Preferring our icy theme to eggs which don’t seem to freeze well, we called it Facets (IV,4), after the unusual layer of crystals in the snow pack in the northern Cairngorms. Not that there was any chance of the snow around here avalanching.

A couple of days later (February 21) I was back with Dave McGimpsey. Conditions were so good that there must be more to do. Sandy and I had spotted an iced groove to the right of Sublimation and left of the older route Beyond the Call of Duty, which is the only Grade III I know with two vertical ice pitches (upgrade suggested!). It looked a bit steeper so we’d taken an extra ice screw. The doubt was a vertical wall, which blocked the groove, and below it was an arete, which split the ice into two thinner falls. The left fall up another groove was tempting but gaining the arete might just be a smear. However there was a green tinge to the ice right at the back, which suggested something thicker and made it worth a go. Sure enough, the green ice was thick enough for a tied off ice screw and good placements for the axes, but one foot was on the smear. The monopoint seemed to hold even though it was too thin for axe placements and only a couple of moves to gain the arete where careful footwork was needed for a 90 degree change in foot angle. Once on the arete you could just stay in balance to place a better ice screw in the thicker ice above and a couple of moves gained the upper groove. We gave Glacial Groove V,5 but with such a short crux, maybe it should be IV,5.

There was some mist around so the diagonal gully would have been hard to find from the convex upper slopes. Also there seemed to be plenty of time before the Gondola finished so we returned to the sacks for food and made the long approach again. Actually it was less tiring the long way round. My photo had two ice smears at the right end and Sandy and I had only climbed the left one (or so we thought). But when we got there, it was obvious that we’d actually climbed the right one. So there was a quick change of plan and we headed up left to where there was a choice of ice lines. To play safe, I suggested we continue left but as I belayed I convinced myself that Dave had gone into West Central Route. So once he’d finished the pitch and was at the top of the cliff, I untied and went up the right-hand way. It did seem a bit mad but I guess we’d covered both options. Of course when I got home and looked at the photo, we were a long way from West Central Route and both finishes were valid. West Central Route is a Grade II but assuming the guidebook diagram marks its position correctly, it must be a lot easier without its big icefall or else there was a huge build-up of snow in 1987. Although we were Begging for More (III,4) on Aonach Beag, we needed to avoid the walk of shame back down to the car.”