Posted on February 7, 2013 by Simon Richardson 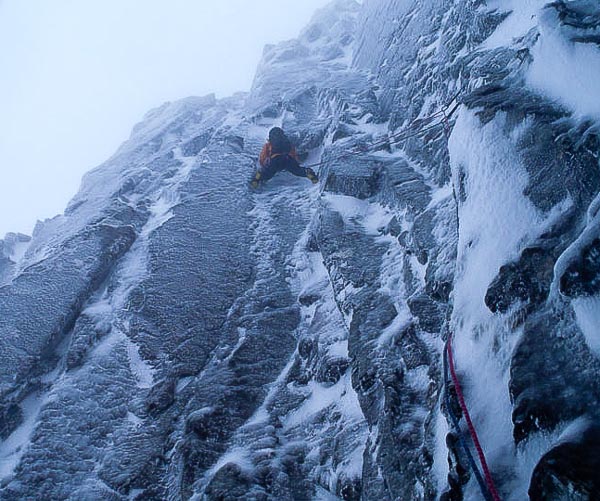 Tony Shepherd on the first ascent of Green Gully Groove (VI,5) on Ben Nevis. This line on the left wall of Green Gully was summed up as – ‘nice climbing, little gear, great belays!’ (Photo Rich Bentley)

Despite being preceded by a week of stormy weather, the Scottish Winter Meet in Fort William from February 1 -3 was a great success. The winds began to die down on the Friday, but the day of the weekend was Saturday when many teams climbed a full spectrum of routes on Ben Nevis from Ledge Route to Point Five Gully to Cornucopia. Later that day, about 50 winter climbers met up for a convivial evening of food, banter and a slide show in the Achintee Inn in Glen Nevis.

Meet organiser Rich Bentley said afterwards that there was “Good feedback from the meet, and hopefully it’s something we can grow in the years to come.” Ideas being discussed are a possible link to the Scottish Dry Tooling Series and rotating the meet around different Scottish venues. There is certainly a demand for a get together of winter climbers on regular basis. The biannual BMC International winter meets have proved to be an important melting pot for UK winter climbers, as well as fulfilling their main aim of showcasing British climbing.

To finish off an excellent weekend, Rich teamed up with Tony Shepherd and Mark Davies on Sunday February 3 and added a new line which climbs out left from Green Gully a pitch and a half up. (The relationship to a Grade IV climbed by Tim Neill and Keith Ball in 2011 is uncertain, but it is thought that Tim and Keith exited from higher up Green Gully).

“We called it Green Gully Groove,” Rich explained. “It’s a cracking new wee line and goes at VI,5. It’s really just a great pitch, and then you can take any exit you fancy up the final nose of The Comb.

One Response to The 2013 Scottish Winter Meet