Posted on February 8, 2013 by Simon Richardson 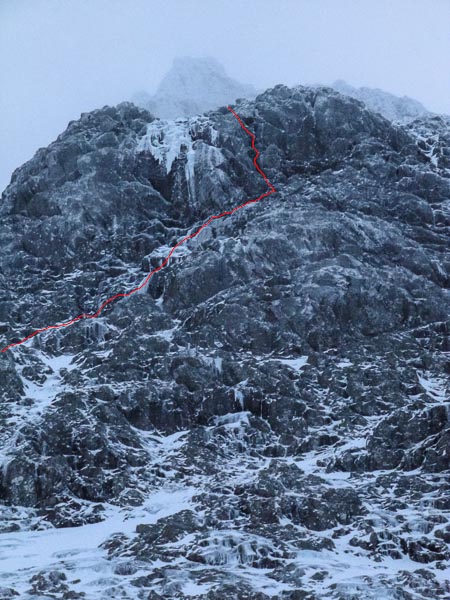 The line of Grooverider (V,6) on Ben Nevis. The route climbs just right of the great hanging icefall on North-East Buttress, which is one of the last remaining unclimbed ice features on the mountain. (Photo Pete Davies)

Pete Davies, Donie O’Sullivan and Ross Cowie added a little bit of new climbing to the North-East Buttress area of the Ben on Saturday, February 2.

“There was excellent snow ice on all the easier angled ground,” Pete told me. “We soloed up towards the steep rock wall between Ramsay Gray and Right Major and then roped up for a nice mixed pitch up a steep groove about five metres right of the prominent hanging icicle that forms here. This brought us out onto the big snowfield above the icicle, which we followed to join the rest of Route Major, which was again covered in snow ice all the way to the summit. The groove is only about 30m long so perhaps it’s only worth a footnote, but it’s quite an obvious feature. We called it Grooverider and it went at around V,6.”