Does Anyone Recognise This Route?

Posted on February 10, 2013 by Simon Richardson 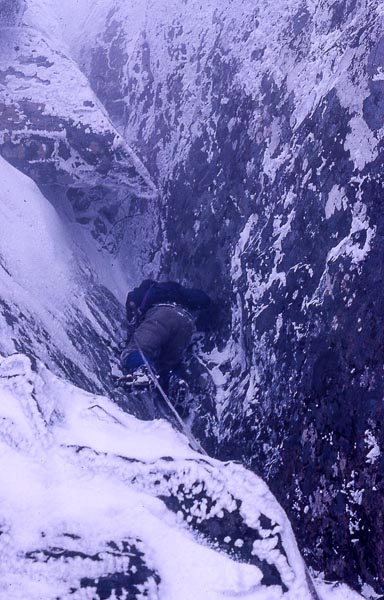 Jeff Lowe on the probable first ascent of a new climb somewhere on Ben Nevis in March 1976. His partner Henry Barber is thinks that it may be in the Green Gully area, but is definitely somewhere between Point Five and Number Four Gully. (Photo Henry Barber)

Nick Bullock is ice climbing in New England at the moment, and recently spent the evening with climbing legend Henry Barber.

Henry climbed a probable new route on Ben Nevis with Jeff Lowe in March 1976, and passed on the above photo to Nick in the hope that he could identify the route. Nick wasn’t sure, so he sent it to me.

To be honest, I’m not sure either, but it does remind me a little of the undercut start to Clough’s Chimney on Comb Gully Buttress. (Ian Clough climbed the top part of the chimney in January 1960, but the first ascent of this lower section is credited to Godefroy Perroux from sometime in the 1990s).

If anyone has any other ideas, please let me know.

“It was a very cool climb on a very cool crag,” Henry remembers. “As you know Jeff isn’t doing very well so I hope to send him a pic or two and boost his spirits.”

7 Responses to Does Anyone Recognise This Route?